Whisper to Me by Sherrie Lowe

A new wife and a vengeful ghost. Not a good mix.
Letitia – Tish – Stanyer makes husband Theo promise never to remarry if she dies and he complies just to pacify her. She isn’t going to die. 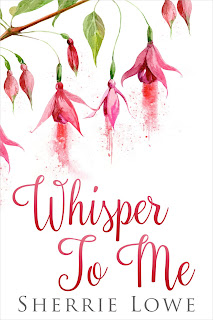 She does – and he does remarry. Tish isn’t happy. Her spirit cannot rest with another woman in her domain, sampling the delights of her husband. Theo belongs to her – Sheena will have to go.

Whisper To Me is a story about multiple romances, one that lives on beyond a mortal lifetime.While one character has been mentioned before in a different novel, this book reads well as a stand alone.It begins on a stormy night, a wedding anniversary, a happy day yet with drastic, dangerous weather. Tish Stanyer seems to have a foreshadowing sense of doom as she reminds her husband that they are meant to be each other`s one and only.Sadly, on a different night, Tish leaves this world, and her husband who must raise their children by himself. From that stormy night forward, this book has a decidedly sinister feel.We meet and view various relationships throughout this book, both human and animal, parental and romantic. Overall, even as things seem to be going very well, there is a sense of dis~ease, foreboding and unsettled. The characters are well rounded, easily identified as who to like and hate.The whole time I was waiting for the next awful thing to happen.

Author Bio –  I am a divorced mum of two adult sons and Nana to three grandchildren, soon to be four. I’ve always had a notion to write but didn’t get round to it seriously until I became ill with M.E in 1995 when I was 40 and was too ill to continue my job as a learning support assistant in a mainstream high school. I was devastated to have to resign from my job but writing saved my sanity. My first attempt was a memoir, Shadow Across the Sun which covered the loss of my mum to breast cancer two days before my 13th birthday. When the rejections began to flow in from traditional publishers and agencies I joined a creative writing class and learned to write fiction. Whisper to Me is my 10th novel. I have a strong belief in the afterlife due to events following my mum’s death so most of my stories have some form of supernatural aspect to them.
Social Media Links –
Website http://www.sherrielowe.co.uk/
Blog https://sherrielowe.wordpress.com/
Twitter https://twitter.com/SherrieLowe2
Facebook https://www.facebook.com/sherrielowe40/