The House That Sat Down Trilogy by Alice May

The House That Sat Down Trilogy: Omnibus Edition

Inspired by a true story, The House That Sat Down Trilogy is a tale of triumph over tragedy. It is an astonishing account of sudden, first-world homelessness in the heart of the New Forest, and the unexpected consequences. Written entirely from a mother’s point of view, following the collapse of her family's home, it is an uplifting and positive read in spite of the subject matter, with a thread of wry humour throughout. Follow this ordinary woman on an extraordinary journey of survival and self discovery as she reels from disaster, before picking herself up and coming back stronger and wiser than before. 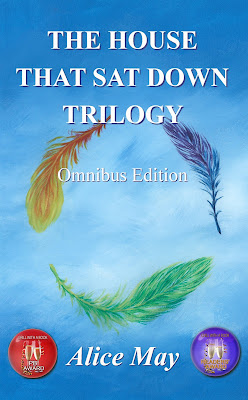 Packed with humorous observations about what it is like to live in a tent in your garden with your husband and four children after a significant part of your house falls down out of the blue one day, this story takes you from the depths of despair right through to the satisfying heights of success against the odds, with lots of tea and cakes on the way.

An Extra Slice of Life from The House That Sat Down
By Alice May
I must confess that when our house ‘sat’ down and we were living in a tent in our back garden, one of the greatest emotions I experienced - other than abject fear, of course - was one of utter failure. I hated my inability to protect the children from what was happening. The cosy home that we had built for them was gone in such a small space of time. I was left reeling, as if someone had literally pulled a rug out from beneath my feet.
The inability to keep a secure roof over our family was a pretty major parenting fail, whichever way you looked at it. The shockingly sudden homeless situation we catapulted into was confirmation to me that I simply wasn’t good enough; triggering a feeding frenzy for my - already flourishing - impostor syndrome issues.
I have always loved being a mum, but have never quite shaken the notion that somebody might appear, out of the blue one day, to say – whoops we’ve made a mistake – you’re not supposed to have these amazing young people in your life, they should have gone to someone else; someone more deserving, more accomplished; someone kinder and altogether better.
Thus, like any mother bird, I became obsessed with creating a safe nest for my chicks.
At that time, one of the many rustic features in our garden was a rather sweet little log cabin. We had built it together as a family, from a pre-formed, fairly idiot-proof kit, several years before. Due to our enthusiastic but inefficient amateur building skills, it was a touch ramshackle but, given our precarious living circumstances, we couldn’t afford to be fussy. I pounced on this facility with some degree of enthusiasm, in spite of the fact that, in reality, it was little more than an overgrown shed. Significant amounts of energy were then expended clearing out junk, cleaning the interior and installing two small, double bedsteads with a mini bedside cabinet jammed between them. With some fairy lights artfully draped around the walls and swags of lacy net curtain over the window, it looked very cute and cosy indeed.
I genuinely thought that we had found an accommodation solution. In theory, the two boys could share one bed and the two girls, the other.
Silly me!
Things didn’t quite work out the way I had hoped and, with hindsight, I am not at all surprised.
Regardless of the fact that we had spent all day creating this little haven, we had not calculated on the children’s reaction, which was an obvious one. The two boys took one look inside the cabin and silently listened to my suggestion that they share one of the double beds, top and tail style – I know! It was a daft idea! – they immediately voted with their feet, by returning to their sleeping bags in the tent and refusing to budge.
The girls, at least gave it a try, each claimed a bed – because there were, now, two available - and they settled in for a late-night reading session.
Thus, I went to sleep a tiny bit happier, in the mistaken belief that at least the girls were sorted. It’s never a good idea to speak too soon. The strident screaming that disturbed our slumbers the next morning, was certainly a change from being woken by the dawn chorus but, on reflection, birdsong – no matter how early - is definitely the better option.
The cabin, whilst cosy and cute, had proven open to a fair degree of wildlife incursion overnight. Poor Logic had woken up to find herself face to face with one of the largest spiders she had ever encountered and this event triggered a predictably panic-stricken reaction. In her defence, it was also one of the largest spiders I’d ever seen. Not quite of terrifying tarantula dimensions, of course, but big enough.
The poor creature - just to be clear here, I am referring to the spider - was probably only curious and, no doubt, totally terrified too. Nevertheless, it was too much of a shock for our girls and in a very short space of time, the entire family were back to sleeping in the tent all together. I couldn’t really blame them.
Ten out of ten for effort goes to the girls for trying; zero out of ten for perfect parenting to me.
Thus, it was back to the drawing board, to plot another plan of action.
Remember, if at first you don’t succeed - try, try and try again!

I hope you enjoyed this - previously unpublished - extra slice of life from The House That Sat Down.
Love Alice

Website: www.alicemay.weebly.com
The House That Sat Down Trilogy by Alice May is available from Amazon amzn.to/2ZcZrKF 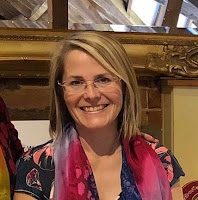 About the Author
I am a multi-tasking parent to four not-so-small children, and I am fortunate enough to be married to (probably) the most patient man on the planet.  We live in, what used to be, a ramshackle old cottage in the country. Our house began to fall down out of the blue one day, which resulted in the whole family living in a tent in the back garden for quite some time, while we worked out how to rebuild our home.
A few years afterwards, I decided to write a book and, once I started, I found I couldn’t stop.
Inspired by true-life events ‘Accidental Damage – tales from the house that sat down’ wouldn’t leave me alone until it was written.
Within six months of self-publishing my novel, I was delighted to learn that it had won two ‘Chill with a Book Awards’. This was a massive honour and motivated me to continue writing. Accidental Damage became the first book in a trilogy.
The Omnibus edition of all three books in the House That Sat Down Trilogy is now available via Amazon in both paperback and kindle format.