Satisfy your sweet tooth with this limited time collection of clean steam New Adult Novels. “All the heat; none of the nasty.” An indulgence that won’t leave you feeling guilty!
100% Profits to benefit the American Heart Association.
Five Amazing Novels; One Amazing Cause

Amy Evans – Jellybean Kisses (Pink, #1)
JELLYBEAN KISSES is the story of Jax and Jacey, two best friends who fake a relationship at the expense of something real. It’s going to take a hurricane, a goose, and a pound of jellybeans to get them to confess their feelings to one other. But can they find the courage before it’s too late?

Cassandra Giovanni – Flawed Perfection (Beautifully Flawed, #1)
River Alhers is the girl next door to the Beckerson Boys. The two brothers couldn't be more different, except for one thing: River.
Bobby loved River, River loved Adam and Adam only loved himself--or so everyone thought. Then one night everything changes, and life long friendships will be tested for the sake of love. As the romance threatens to destroy everyone involved, a tragedy strikes that will leave more than just a friendship broken.

Nikki Godwin – American Girl on Saturn (Saturn, #1)
When attempt has been made on the lives of Canadian boyband, Spaceships Around Saturn, during their USA tour, the guys have to go into hiding ASAP with a secret service agent's family, which includes two teenage daughters and a five-year-old fangirl. But after the super-cute Milo kisses Chloe during a game of hide-and-seek, she finally understands what little sister Emery means when she talks about SAS being "out of this world." If this is what Saturn feels like, Chloe doesn't want to come back to Earth.

Deirdre Riordan Hall – To the Sea (Follow Your Bliss, #1)
To the Sea is the story of twenty-something Kira, freshly out of college and newly married, when she faces the unexpected loss of her young husband. As grief weighs her down, she uncovers the secrets he left behind. While trying to overcome tragedy, she learns to surf—on a surfboard and the waves in life. She navigates new feelings of lust with Australian hottie Jamie, and the depths of love with soul-surfer Ian, all while discovering her own strength, overcoming loss, and transforming her life. 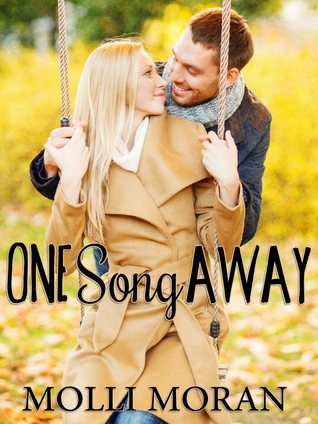 Molli Moran – One Song Away
Sophie-Claire Wright keeps waiting for the lucky break that will launch her songwriting career, but lately her life feels more like a bad country song on repeat. When she moves home and tells a tiny lie--that she has a boyfriend--she turns to an old friend and crush to play the part of her fill-in boyfriend. Soon, sparks are flying between them, and Sophie can't tell which kisses are real and which are fake. Just as she decides to take a leap of faith, she receives a chance to return to Nashville and the songwriting dreams she left behind. Is the life she wants ONE SONG AWAY or has she already found it in Jake's arms?

Purchase from Amazon or B&N for only 99c!