A Watery Death By Joyce and Jim Lavene Review 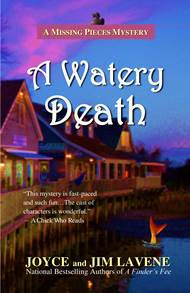 It’s the Fourth of July weekend in Duck, North Carolina and twenty-thousand visitors are on hand to enjoy the parade, the festivities – and learn about the murder of Captain Bill Lucky.
Lucky is the captain of the new gambling ship, Andalusia II, which is modeled after the famous ghost ship that haunts the small town on the Outer Banks. Like her predecessor, the Spanish treasure ship replica has been a boon to the hardy residents of Duck, but it has proven unlucky for her captain.
Mayor Dae O’Donnell has her hands full with setting up the parade set, convincing her friend, Trudy, that she shouldn’t call off her wedding, and getting her shop, Missing Pieces, ready for the summer when she makes most of her money for the year. She doesn’t need the problems involved with a local murder.
But Captain Lucky involves Dae when he asks her to buy an artifact from him that is supposed to be able to summon mermaids. He says he needs money to get out of town for a few days until some problems are resolved. Dae is glad to help him, but isn’t prepared to find him dead in his quarters on the Andalusia when she returns the keys he dropped at her shop.
It isn’t the first time that mermaids and mermen have been seen in Duck, but it’s the first time one of them has been accused of murder. While her grandfather and her fiancé, Kevin, struggle to believe such a thing is possible, Dae is left trying to prove her new friends are innocent.
But if someone from the sea isn’t Captain Lucky’s killer, who is? And will he or she strike again to lay the blame on the town’s watery visitors?

Spend the fourth of July in Duck, N.C. with a wonderful cast of interesting and unusual individuals.
Dae O'Donnell is not only the mayor, she is also the owner of Missing Pieces, antiques and found objects store, thanks to her mystical gift of being able to "feel" an item's history and verify to whom the item belonged .
Normally a quiet coastal town, except during tourist season, the addition of a gammbling boat has brought new elements to Duck. When the dashing and amorous Pirate-like Captain of said gambling boat is discovered dead in his cabin under extremely unusual circumstances, secrets from a long time past float to the surface.
Full of charming yet quirky townsfolk, matrimonial upheavals and some psychic, time traveling magic, this is a town to get lost in. It was also fun to have a cameo appearance by Peggy and Steve, another intriguing Lavene couple.
(see the Peggy Lee Gardening Mystery series)
I have not read the previous books in this series yet but they are near the top of my MUST READ pile.
I am grateful to have received a copy of this book as part of a blog tour, in exchange for my honest review

Joyce and Jim Lavene write award-winning, bestselling mystery fiction as themselves, J.J. Cook, and Ellie Grant. They have written and published more than 70 novels for Harlequin, Berkley, Amazon, and Gallery Books along with hundreds of non-fiction articles for national and regional publications. They live in rural North Carolina with their family.
Author Links
www.joyceandjimlavene.com
www.facebook.com/joyceandjimlavene
http://amazon.com/author/jlavene
https://twitter.com/AuthorJLavene