Don’t stay a moment longer than you have to. Don’t say too
much. Don’t pollute the timeline. 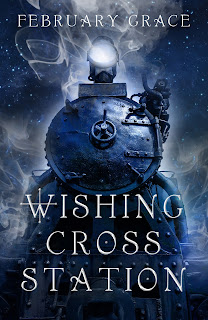 When nineteen-year-old college library page Keigan Wainwright
is sent to pick up a private donation of books for
the school’s collection, he has no idea where one of those
books will take him, or what it will take from him.

Retracing a powerful man’s footsteps through the past,
Keigan finds himself caught in the same dangerous trap:
falling in love with a woman he was never meant to know,
and uncertain he will ever find his way home.

The glorious opening passage describes Aurelia Belle as a living, steam breathing creature.This adventure in a combination of historical time traveling romance and fantasy, an opportunity to live the lives of those from over a centruy ago. Whispering Cross - is it real or is it a magical creative imagining?Keigan Wainwright is a young man struggling to stay true to his personal values.His parents wanted to put his grandfather into a facility, but Keigan decided to move in with his grandfather to allow him to live his final years at home. This did not sit well with his parents.After the grandfather's death, K.W. inherits the house and car but feels somewhat lost and alone.He has friends, and a job as a page at the community college library. Sometimes that job feels less rewarding than he'd like.One less than desirable assignment is to pick up a dusty attic full of donated books. Little does Keigan know, this will lead to the adventure of a lifetime, an adventure that will change his life forever. This story will transport the reader to another place and time.Like the main character, K.W., you'll find yourself wishing you could stay.I did receive this book for a blog tour but the opinions expressed are 100% my own.

February Grace is an author, poet, and artist from Southeast Michigan. In previous novels, she has

godparents, and reimagined a legend, centuries old. Now, in her fifth novel with Booktrope, readers

will board the special at WISHING CROSS STATION and embark on a trip through time. She is more

than mildly obsessed with clocks, music, colors, meteor showers, and steam engines.
Posted by Laura S Reading at 4:14 AM