Beeline to Murder
by Meera Lester 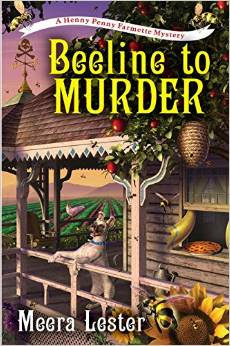 A Beeline to Murder
(A Henny Penny Farmette Mystery)

From peacekeeper to beekeeper…

After an injury forced her to leave the police department, Abigail Mackenzie started a second career as a farmer. Raising chickens, harvesting honey from her bee colony, and growing heirloom vegetables on her farmette in the beautiful Bay Area town of Las Flores, Abby has embraced all the benefits of a peaceful life.
But when she attempts to deliver her trademark honey to local pastry chef Jean-Louis Bonheur and finds him dead in his shop, her old investigative instincts kick in. After the coroner rules the death a suicide, the chef’s handsome French-Canadian brother insists on hiring Abby to find out who really killed Jean-Louis.
With the patience of a farmer and the industriousness of a bee, Abby sorts through a swarm of suspects, including the chef’s landlord, his protégé, an eccentric homeless woman, loan sharks, and a brawny biker. But as she closes in on the truth, she’ll need more than her beekeeper suit to protect her from a killer’s sting…
Includes farming tips and delicious recipes!

This debut mystery novel has so many wonderful elements that keep cozy readers coming back for more.
Abigail Mackenzie was a strong, independent police officer working for a micro managing power hungry boss. He would string her along with promises of promotion but after seven years she was still a beat cop. She enjoyed knowing the people in her community. When an injury finally made her choose retirement, Abby stayed in the area, retreating to a neglected farm and her chickens and bees.
Early one morning when she is delivering honey in town she discovers the body of a pastry chef who has not been accepted by everyone in town.
When the police chief rules it suicide, the handsome, moody yet sexy brother of the chef hires Abby to look into the death.
Abby agrees that there is more to the death. As she investigates there are plenty of people who wish she would mind her own business. The book is filled with characters we will appreciate spending time with in future books. The mechanics of the murder itself could have been more precise. I liked that Abby fought her attraction to her client for as long as she could and that someone else seems to be interested in her, complicating things.
At the beginning of each chapter are tips and advice, with recipes included to tempt us. I did receive the book in exchange for an honest review.

About The Author –
Meera Lester is the author of nearly two dozen nonfiction books and the proprietress of the real Henny Penny Farmette, located in the San Francisco Bay area in Concord, California.  Meera co-founded Writers Connection, a Bay Area organization of writers and publishing professional.  Readers can visit her blog athennypennyfarmette.com.
http://meeralester.com/mlls/