Jairus Twombly's familial intuition is faltering and his new personal assistant seems to be tryingto replace his wife, Amy.

On the Twombly College campus, someone is breaking into the dorm rooms of female students leaving things instead of taking things: red colored objects including a red golf ball, a red ribbon and a tiny red stuffed dog. 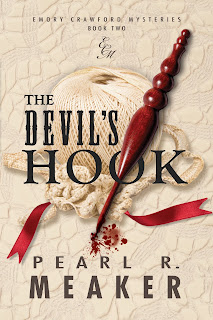 When a recipient of some of the red objects goes missing and is returned after being told,
"You're not her", and the personal assistant turns up dead with Amy Twombly's elegant
Bloodwood crochet hook in her eye, things heat up for Emory Crawford and her chemist and forensic scientist husband, Dr. Jebbin Crawford.

Emory, along with the Twombly's Nancy Drew-like daughter, Madison, once more turns to her amateur detective skills and intuition to solve the mysteries.

“Yeah. Well.” Captain Henry looked into the box. “Weird things. An un-inflated red balloon.
Round shaped, not like a condom or something like that. A red golf ball. I mean, where on earth
do you get red golf balls? And six more things. The roommate said she’d gotten more of this
junk than anyone else, so far. Here.” He plopped the box on Jebbin’s desk with a thud and stuck
a clipboard in front of his face. “It’s all yours as soon as you sign for it. Items are all listed on the
form. We didn’t do a bunch of separate sheets, but they’re all bagged and numbered individually.”

Jebbin signed the sheet and handed back the clipboard.

“I ‘suppose you’re gonna let her look through it all?” Henry said, looking at me. He held his right
hand up like a cop directing traffic to stop. “No. Nope. Don’t tell me. I really don’t want to know.
Like you said. Your office. Your little scientific, antiseptic, sterile world where, yep, they’re all
your decisions.”  He walked out, though I caught his mutter: “Whole crime fighting world is goin’ to hell in a handcart.”  He gave me one last look before he closed the door.

“Can I see?” I sounded as much like an eager kindergartener as I could.

“Yes, little Emory. You can look if you’re a good girl and don’t open any of the baggies yourself
and don’t touch the things inside them.”

We both got up, Sophie too, to take the box to the lab.
Jebbin paused to look around, as though he was forgetting something.
“What?” I asked.
“Where’s the handcart that you’re taking the whole of investigative procedure to hell in?”
I linked my arm through his.

Pearl R. Meaker is an upper-middle-aged, short, pudgy homemaker, mother, and grandmother who in 2002 became a writer. Initially writing fanfiction she soon tried original fiction at the encouragement of her regular readers. She has been a life-long lover of mystery stories and automatically went to that genre for her first book, The Devil’s Music.

She and her husband of nearly 40 years live in central Illinois. They both love bluegrass music, playing fiddle and banjo and singing. Pearl also does many crafts –  when she’s not reading or writing - knitting, crochet, origami, needlepoint, and cross-stitch among them. She also enjoys birding and photography and is a former fencer.

An interesting cozy with a fresh approach; a mature amateur sleuth teamed up with the teenage daughter of a colleague, reminiscent of a pairing of Miss Marple and an aspiring Nancy Drew.
Winter break at Twombly College allows an opportunity for less serious, more flexible classes. Mrs. Crawford is teaching crochet to a group of varied students, from 14 year old Madison and her mother, Amy, wife of a prestigious professor, several college students, including two male soccer players, and an adult accountant, suffering from pneumonia and boredom.
Emory Crawford has adult children of her own and is beginning to feel pangs of empty nest syndrome. Fortunately she still has two cats and a golden retriever to mother. Emory also has some intuition or psychic awareness. The esteemed professor Twombly also has some extra sensory abilities, more developed than Emory's. The animals may have some intuitive intelligence, similar to Koko, the cat WHO, or it could just be Emory's desire for them to communicate with her.
Strange things are happening on campus. Someone is breaking into rooms and leaving red objects. There is no explanation. It is just weird.
One student who receives the mysterious red items is in the crochet class.
Things escalate when she is drugged and kidnapped. Emory can not keep her nose out of the investigation.
Even worse, the professor's P.A. ends up dead in his home kitchen after a loud argument with Amy. Madison can't sit back and watch her mother take the fall. She knows Amy is not guilty, but the evidence isn't clearing her.
This is a quick read. The crochet talk is interesting and the food descriptions are tantalizing. I wish the incredible pot pie recipe was included, but from details given, even I can create it. Something about this author's writing encourages readers to cook.
There are a lot of relationship issues discussed, some sleuthing over every dinner, and several mysteries to solve, including an ongoing curiosity about Emory's psychic intuition. Even after the main mysteries are solved, there is enough left unexplained to make readers look forward to another book.
This does well as a stand alone, but some references are included to past events. I look forward to seeing the characters grow and develop.
I did receive this book in exchange for an unbiased review.