A Sojourn Among the Avatars of Wisdom 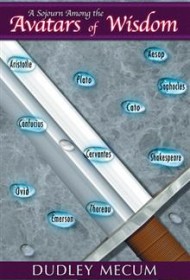 A Sojourn Among the Avatars of Wisdom

Chris Cole enjoys aiming for the stars.
After he rockets into orbit aboard the space shuttle, his mission is cut short when he is the victim of an accident aboard the International Space Station. Whisked back to earth for medical observation, Chris is eventually released.
Before his return flight to Kennedy Space Center the next day, Chris decides to attend a nearby medieval fair with an acquaintance—a decision that will change the course of his life forever.
Shortly after the astronaut's arrival at the festival, the king unexpectedly selects Chris to be a contestant in a tournament. As Chris's quest to become a knight begins, he learns how to wield a sword, battle foes, and achieve greatness.
Unfortunately, villainy, treachery, and a crucible await him. As enemies emerge from the shadows, others use him as a pawn to settle old scores. Guided by a cast of colorful characters who dispense timeless advice, Chris is overcome with self-doubt as he ponders whether it is really possible to change his destiny.
In this gripping fantasy tale, wisdom of the world's greatest philosophers and modern sages is brought to life as one man attempts to escape from a prison of his own making.

A Celestial Riot
Amid the great expanse of the star-filled sky, light from the crescent moon reflects off the warm, undulating surf. A humid, early September breeze sweeps on shore past a beach strewn with scattered seashells, pebbles, and an occasional stranded jellyfish. Beyond the hardwood hammock-filled spit of land lie partially submerged alligators in a lagoon, waiting for their next meal. A symphony of frogs and crickets fills the early evening air. Centered in a vast circular clearing a half mile inland, a spotlight-illuminated launch complex erupts with an ominous rumbling.
Abruptly shockwaves ripple outward as ephemeral walls of condensation travel at the speed of sound, heralding a blinding burst of light and a volcanic roar. Two immense jets of flame scorch the earth in opposite directions and then quickly recede, growing into twin pillars of fire. Night turns to day briefly as the earth shudders like an earthquake. Vaulting above the banks of billowing exhaust clouds, that celestial dart known as the space shuttle, centered on an orange external fuel tank and flanked by two white solid rocket boosters, thunders heavenward.
Like a giant yellow flare piercing the night sky, the orbiter's burning exhaust traces a gentle arc over the Atlantic Ocean. Inside the spacecraft six crew members are all wearing pumpkin-colored pressure suits, their dark visors on their white helmets locked in the down position. Not only do the astronauts feel seismic vibrations coursing through the shuttle but also a heaviness against their chests from being hurled at up to three times the force of gravity, which their G suits counteract to a limited degree.
The orbiter's cockpit-like flight deck, covered in a sea of buttons, knobs, and switches, would intimidate any 747 captain. Unlike a conventional airplane, the spacecraft has over two thousand controls and displays for space, conventional atmospheric, and payload operations.
Commander Susan Wells and pilot Xavier Howard monitor their ascent as three hundred black boxes connected to five general-purpose computers ensure that the shuttle is on the correct trajectory.
Sitting behind the commander and pilot, Chris Cole, a payload specialist and the final crew member on the flight deck, revels in his first launch. His duties will begin at the midpoint of the mission.
Also onboard are three members of the next expeditionary crew to the International Space Station, who are seated on the middeck, one level below the cockpit.
Just two minutes into its eight-and-a-half-minute climb to orbit, the spacecraft automatically jettisons its twin 150-foot solid rocket boosters, momentarily making the orbiter appear as a rising comet, while inside the flight deck, the astronauts see a blinding flash.
The shuttle's ride instantly becomes smoother as the solid rocket boosters fall away at an altitude of 150,000 feet. The orbiter's progressively horizontal trajectory continues until it is nearly flat, inverting the spacecraft. Even though the astronauts are seated normally, their heads point toward the sea.
The shuttle, rocketing northeast over the North Atlantic toward dawn over Europe, slices through an ever-thinning atmosphere, which provides less of a medium in which to propagate sound, over the course of the next six and a half minutes. As a result, the roar of the main engines gradually abates.
Near the end of the ascent, the orbiter slowly rolls to a normal heads-up position. Reaching a speed of roughly 17,500 miles per hour in a little more than eight minutes, the spacecraft reaches main engine cutoff, and everyone experiences weightlessness. So fast is the shuttle's speed that it circles the globe once every ninety minutes, reducing day and night to forty-five minutes each.
Earth, looming beyond the cockpit windows, casts a lustrous cerulean hue against the unforgiving black void of space. Adding to the unnaturalness of space flight is traversing entire continents in minutes, unified without national borders.
The welcome quiet, save for the whir of the avionics, is interrupted by a clanging sound of the jettisoned external fuel tank, which will eventually break up as it reenters the atmosphere over the Indian Ocean. Minutes later Susan spots the spent fifteen-story orange external fuel tank, which is blackened on the top third of the structure from explosive jettison charges, floating forlornly in space.
Secured inside and occupying one third of the orbiter's cargo bay is the multipurpose logistics module, a metallic cylindrical container used to transfer supplies and equipment to the International Space Station. Also stowed as cargo is Chris's payload—a pair of soccer ball-sized, tethered, self-propelled satellites that will eventually provide permanent remote video inspection of the same facility, which he will deploy on day two of the mission.
As the spacecraft approaches the terminator line that divides day from night, towering thunderheads brushed with coral tones—their shadows slanting across the sea—swiftly scroll into view. Farther to the east Earth dissolves into darkness. Pulses of light flicker in the distance, which, as the shuttle draws closer, gradually blossom into massive storms with volleys of lightning arcing through a network of clouds.
Soon nature's fireworks disappear from view. And where the clear skies dominate the land, a strange web of lights shines forth, with many bright strands clustered along the coast and pale threads stretched inland. Then a sea of darkness reigns again until a glowing orange crescent forms on the horizon, for the orbiter is nearing the terminator line once more as dawn approaches.
The light of a new day rapidly washes over the spacecraft and veils the heavens. But on the horizon a lone starlike object remains—the crew's new home, the International Space Station (ISS), orbiting 240 miles above Earth.