Cover Reveal: Life in the Lucky Zone (The Zone, #2) by Patricia B. Tighe

Welcome to the cover reveal for
Life in the Lucky Zone (The Zone, #2) by Patricia B. Tighe
presented by Swoon Romance! 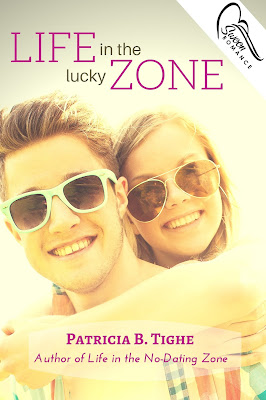 Seventeen-year-old Lindsey Taylor has been living a charmed life—always the lead in school plays, possessor of a healthy entourage and a hot boyfriend. But halfway through her junior year, the unthinkable happens. Her boyfriend dumps her. She screws up her audition for the spring play. And to top it all off, her theater teacher wants her to run lines with Trey Berger, a gamer guy who irritates her practically every time he opens his mouth. Lindsey needs to find some better luck and quick.
Trey Berger can barely tolerate Lindsey Taylor. It’s bad enough that their best friends are dating and he has to see Lindsey at group hangouts. Now they have to rehearse together. Berger would rather do just about anything else, even chill with his grandmother, whose dementia has forced her to move in with his family. But as the semester continues, Berger discovers there’s more to Lindsey than the drama queen persona she puts on for everyone else’s benefit. And the person behind the mask might be someone he cares about. A lot. So what exactly is he going to do about it? And while Lindsey desperately tries to change her luck and heal from the breakup, she slowly realizes Berger has become her best friend. This video-game-playing boy makes her laugh. And holds her when she cries. Could he possibly become something more? 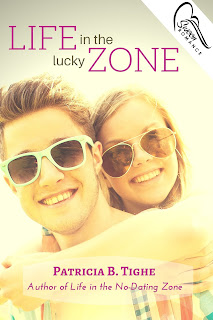 Life in the Lucky Zone (The Zone #2) by Patricia B. Tighe Publication Date:  April 5, 2016 Publisher:  Swoon Romance
Available at: Amazon

The mother of two grown sons, Patricia B. Tighe lives in El Paso, Texas, with her husband and two dogs. Her love of the written word caused her to get a journalism degree from Texas A&M University in 1980 and an MA in Writing Popular Fiction from Seton Hill University in 2008. When not writing or reading, she can be found walking the dogs or yelling at the TV during an NFL game. She's also a fan of British TV shows. Downton Abbey, anyone?