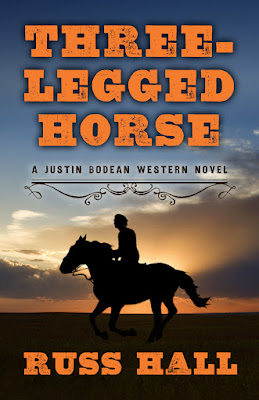 Justin Bodean, 15, heads out into the untamed Texas of the mid-1870s with his father to seek a hidden stash of Civil War gold as they travel to see Aunt Sara. They get more adventure than they bargain for when bandits attack their stagecoach. Facing outlaws, renegade Comanche warriors, and landing right in the middle of a cattleman’s feud tests the courage Justin knew would be expected of him out in the west. One travel companion, a writer of dime novels, has come out this way to gather gritty details for his writing. Two others cast in his lot are a cowhand as well as a preacher who wears a gun. They find themselves in a world of Rangers, greedy ranchers, and all-in-all a place where not everything is what it seems . . . except the flying bullets. It’s a far tougher place than Justin has ever been, and Lucas the cowhand tells Justin that he has as much chance of making it out here as a three-legged horse.

He half dozed as he lay there, a patina of sweat forming on his forehead. His wounds throbbed, but they seemed to be scabbing over in their own healing way if he didn’t move. After what seemed hours, he heard approaching sounds. Low hoof clicks tapped the ground, coming his way. At first he thought they were far away, then he realized they weren’t the sounds of a shod horse. A Comanche was coming his way. He stayed as still as he could. Hardly breathed at all. He could see them now, from hoof to pastern, the legs of the paint horse were covered with something. Now, so close he thought he could reach out to them. . . 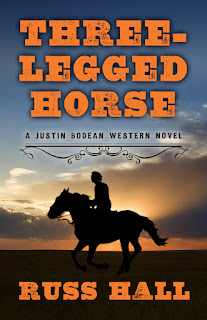 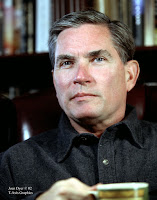 Russ Hall lives by a lake in Texas Hill Country near Austin. He has been an editor for major publishing companies, ranging from Harper & Row (now HarperCollins), Simon & Schuster, to Pearson. A writer of westerns, mysteries, thrillers, poetry, and nonfiction books, he has had more than twenty books published, as well as numerous short stories and articles. In 1996 he won the Nancy Pickard Mystery Fiction Award for short fiction. In 2011 he was awarded Sage Award, by The Barbara Burnett Smith Mentoring Authors Foundation—an award for the mentoring author who demonstrates an outstanding spirit of service in mentoring, sharing and leading others in the mystery writing community. In 2014 he won First Place in the Austin International Poetry Festival. The Writers' League of Texas awarded To Hell and Gone in Texas its 2015 “Fiction Discovery Prize”

This coming of age and responsibility tale has many qualities of well loved classic western novels.
One of the main characters is, in fact, a best selling author of dime Western stories, although before now, Francis had never ventured into the wild west.
The story begins with a vicious stage coach robbery, resulting in the loss of Justin's father and anything of value the coach was carrying. This was supposed to be a fresh start for the Bodeans. Now 15 year old Justin finds himself alone, penniless and without a plan.
Full of cowboys, secretive and not loyal or true blue, Texas Rangers who are dedicated while ambitious, a hearty, headstrong female homesteader, prepared to do whatever it takes, and Indians who are more clever and cunning than anyone gives them credit for. Not to mention two power and money hungry families trying to take over the entire territory, and destroy each other.
Written with wry humor in exciting and gritty language, this dangerous adventure includes a treasure hunt, characters who are not what they seem, even potential romance. Who will survive?
A wonderful suspense filled tale for readers new to the Western genre as well as fans of the noir.
I did receive a copy of this book in exchange for an honest review.