When a Laird Loves a Lady

When a Laird Loves a Lady
(Highlander Vows: Entangled Hearts, #1)
by Julie Johnstone 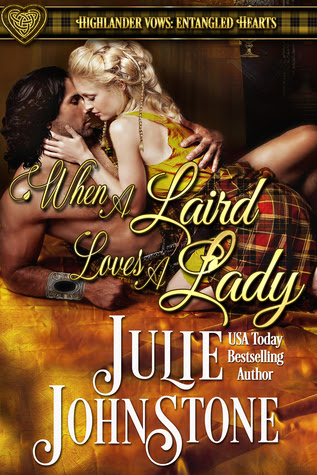 When a Laird Loves a Lady (Highlander Vows: Entangled Hearts, #1) by Julie Johnstone

A need to belong drives her.
A longing to forget compels him.
Fate may send them into each other’s arms, but only love can mend their hearts.

An Outlander Raised by a tyrannical father, Marion de Lacy yearns for the comfort of belonging to a loving family.
So when her father announces her betrothal to an evil baron in exchange for a number of knights, she concocts a desperate scheme to avoid the marriage: feigning her own death and then fleeing England.
But when her plan goes terribly awry and she’s captured by the baron, not even her careful preparations could ready her for the Scottish barbarian who rescues her and then informs her that he’s to marry her by edict of her king.
Certain her father will defy the king’s orders and wed her to the baron if she refuses the Highlander’s hand, Marion agrees to marry the strangely compelling but obstinate laird of the MacLeod clan.

A Highlander
After the death of his beloved wife, Iain MacLeod has no desire to marry ever again. Yet when he finds himself obliged to do so to secure the freedom of his childhood friend and king, he reluctantly travels across England to collect his unwanted bride, expecting to find a cold Englishwoman.
Instead, he discovers a fiery, bold beauty who is fiercely loyal, protective of those she loves, and defies him at every turn, challenging his certainty that his heart is dead.

Ensnared
Following a hasty marriage and perilous journey to Scotland, Marion harbors no illusions that her new husband loves her. Still, her heart cannot resist the noble, brave warrior, and she cannot suppress the hope that she has finally found where she belongs. However, the harder she tries to fit in with the clan and gain Iain’s love, the farther away her dreams drift.
Iain is more than willing to give his respect to his courageous wife—her kisses and caresses even ignite his blood and demand his passion—but he refuses to give up his heart. That is, until enemies near and far threaten to take Marion from him.
Now the demons that haunt him can only be conquered by surrendering body and soul to Marion, if only it’s not too late… 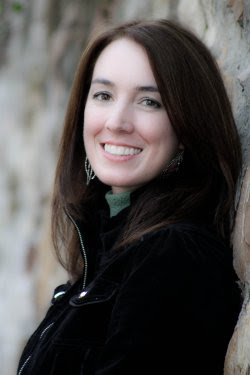 Julie Johnstone is a USA Today best-selling author of Regency Romance and the author of a new urban fantasy/paranormal romance book.
She's been a voracious reader of books since she was a young girl. Her mother would tell you that as a child Julie had a rich fantasy life made up of many different make believe friends.
As an adult, Julie is one of the lucky few who can say she is living the dream by working with her passion of creating worlds from her imagination.
When Julie is not writing she is chasing her two precocious children around, cooking, reading or exercising. Julie loves to hear from her readers.
You can send her an email at juliejohnstoneauthor@gmail.com or find her at
www.juliejohnstoneauthor.com,
or on Facebook at www.facebook.com/authorjuliejohnstone
or on Facebook at https://www.facebook.com/juliejohnstoneauthor
or at twitter @juliejohnstone.

As I am reading I am loving the language. It draws me deeper into another place and time and doesn't slow me down!  This is a perfect escape read.
Written about a time when women had no value yet were still priceless.
Marriage to Marion de Lacy was much sought after for the land and allegiant ties that come with her.
Her father, a cold, cruel man intends to marry her off to a possibly more cruel and heartless man strictly for his political and power hungry self centered plans.
Knowing this, Marion decides her only choice is death and she fakes her own.
Iain MacLeod, a Scots laird, is fair and reasonable, also not bad to look at, but ends up being ordered to marry Marion as part of political negotiations towards the release of Scottish King David who is being held prisoner by English King Edward.
This is not a exactly political thriller but politics set up the dilemma.
This is an excellent historical adventure romance with something for everyone.
Betrayal, exciting adventure, a mystical seer, bickering females -
it isn't as simple as knowing who can't be trusted!
Ian has been married and finds no need to marry again. He agrees, only to aid his king.
He has no intentions of giving his heart to anyone, especially an English woman.
Marion, on the other hand, has no intentions of marrying for anything other than love.
The characters are beautifully complicated. The relationships, even between siblings and friends, are well developed and altogether draw you right into the action.
Reading about Marion's introduction to the physical side of a marriage will have you experiencing it as if it is your first time. I can not recommend this strongly enough. Pick it up and enjoy!
I am anxiously awaiting to read more about Bridgette's adventures.
If I could give it more than 5 stars I would.
Posted by Laura S Reading at 12:30 AM