Little Is Left To Tell 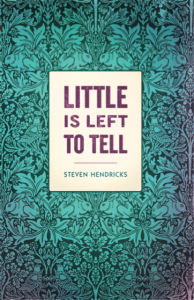 About Little Is Left to Tell


Little Is Left to Tell is the haunting novel by master fabulist Steven Hendricks.
Enter a nocturnal world where the unreal is seen on a liminal horizon of fading memory, illuminated by partial understanding and lyrical fictions.

Virginia the Wolf writes her last novel to lure her daughter home.
A rabbit named Hart Crane must eat words to speak, while passing zeppelins drop bombs. Mr. Fin tries to read the past in marginalia and to rebuild his son from boat parts.

A novel that bridges between dreamscape and reality, Little Is Left to Tell is entrancing and enthralling. "In Little is Left to Tell one scene is quietly illuminated and then that illumination glides to the next, equally quiet and wondrous.

Like a dream that inhabits an entire life, even a life of reading, this is a deeply rich and surprising novel." -- Amina Cain, author of Creature

"A tale about the ravages of old age, the weight of the past and bunny rabbits. Debut novelist Hendricks tries to apply the whimsical mood of fairy tales to the mildly experimental fiction at play here, and he largely succeeds despite the grim nature of his story. ...A vivid story that uses the language and metaphors of myth to reflect on the unkind nature of age and perception." -- Kirkus Reviews

I will be honest. This book will not appeal to everyone. That is a compliment.
I  read an e-version but also enjoyed the audio sample and will listen to the whole book in the future. Do NOT listen while driving.
This is not a children's fantasy.
Beginning as lyrically peaceful as a Beatrix Potter fairytale, until the bombs drop. (on page two)
It is a story of grief on multiple levels. A mother rabbit's loss, a father's repeated losses, of his son and his memories. Told in alternating time periods and viewpoints, are any of them "real?"
At some points it may be a challenge to focus and identify the events and where they fit in time, or if they fit at all. This is also part of the appeal of this book.
I did receive a copy for review purposes. 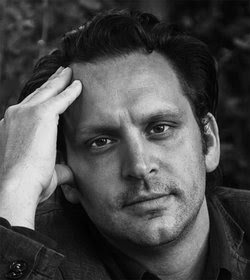 Steven Hendricks lives in Olympia, Wa. with his wife and two children.
He teaches writing and book arts at The Evergreen State College.
His work has appeared in The Denver Quarterly (2000), Conjunctions (2001), Fold: The Reader ( 2002), and The Encyclopedia Project Vol. 3 (Sidebrow, forthcoming).
He earned his MFA in Writing at The School of the Art Institute of Chicago in 2000.
Little is Left to Tell is his first novel.
Visit Steven at his website.

I also enjoy the alternate cover