There are many, many substories going on in Die, Die Birdie. They all fit the flow of the story and they make sense together. I was entertained every single page while reading this book.~Back Porchervations

The town setting of Ruby Lake, North Carolina is appealing – and populated with lots of interesting, quirky people.~The power of words . . . 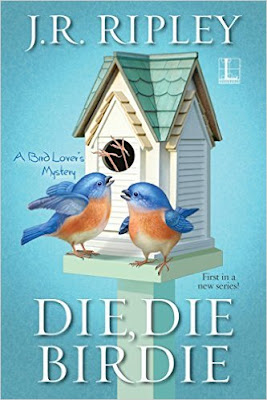 For Amy Simms, hatching a birding shop in her hometown of Ruby Lake, North Carolina, hasn’t exactly been a breeze. But could a deadly discovery clip her wings for good?
It’s just days before Amy plans to open Birds & Bees on the first floor of her creaky Victorian house, but delayed seed shipments have prevented the fledging owner from stocking her shelves. And it doesn’t help that Amy’s best friend and business partner is out of town indefinitely. With locals skeptical about the niche shop taking flight, the last thing Amy needs now is a dead man in her storeroom-or for a crotchety tenant to catch her holding a bloody birdfeeder hook over his body . . .
Pigeonholed as a leading murder suspect by police and lacking a solid alibi, Amy’s delving into the victim’s ugly past and buzzing around Ruby Lake for clues on his killer . . . beforeshe ends up like so many of her beloved feathery friends-trapped behind bars!

Abuzz with a flock of feather brained puns, this cozy mystery has a wide cast of characters.
The house/store itself plays a major role in the plot. Grumpy older women seem to have huge personalities that come into play.
Danger abounds and connections from the past , both real and imaginary, mean no one is safe.
While not looking for romance, Amy Simms finds herself attracting attention. Her best friend and business partner seems to be keeping secrets, at a time when Amy really needs someone to believe in and count on.
Every mystery needs motive, opportunity and of course a means. In this case, all three point to Amy.
The only way she can save herself, and eventually her best friend as well, is to solve the case since her former classmate, now police chief, doesn't see the need to look further.
I liked the characters and hope we get to interact with them in further adventures. J.R. Ripley is the pen name of Glenn Meganck, the critically acclaimed author of the Tony Kozol mystery series. As a member of the Mystery Writers of America, he has chaired the Edgar committee for Best Original Paperback novel and served on the Best Short Story Committee. As a member of the International Association of Crime Writers, he has served on the Hammett Award committee for Best Novel. When not writing books, Glenn is writing songs, often singing them to the consternation of his audience and neighbors, or involved in one of his many passions, none of which have involved any of the dead bodies that seem to keep cropping up in his mysteries. For more information about him, visit glennmeganck.com.
Author Links
Purchase Links:
Amazon