When Jenny McCleary leases her property to be ravaged by the annual mud bog races, the small rural town of Sabal Bay, Florida, is divided into warring camps: environmental activists versus monster truck fans. Jenny, who frequents the consignment store owned by Eve Appel and her friend Madeleine, doesn’t seem to mind when Eve and Madeleine join the protesters the day of the races. 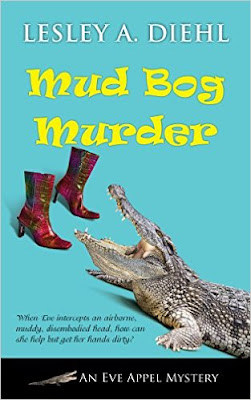 During the race, Eve catches Jenny’s airborne head after it is tossed into the air by the wheels of a truck. Now every protester is a suspect in Jenny’s murder. What’s left of her alligator-gnawed body is found near the airboat business of Eve’s Miccosukee Indian friends, Sammy Egret and his grandfather. When more evidence turns up nearby, Grandfather is arrested.
Even without the disembodied head, Eve has her hands full. The town resents her role in the protests and is boycotting the consignment shop on wheels. She is torn between two men–GQ-handsome, devoted PI Alex and tall, dark, and exotic Sammy. Jenny’s sweet and needy teenage daughter is dating a petty criminal. Will Eve and Madeleine ever be able to move into their new digs? Not unless the town forgives them. And not if whoever decapitated Jenny gets to Eve before she and her sleuthing buddies solve the mystery. 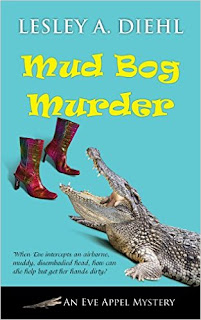 
By Lesley A. Diehl
Author of Mud Bog Murder

My name is Eve Appel, and I must tell you that for the first time in my life I am confused. See, I’m the kind of gal who knows her mind, or at least I used to. I was born in Connecticut and lost my parents when I was nine years old. My mother’s mother, the woman I call “Grandy” raised me. I can’t think of a better surrogate mother. Grandy is a no nonsense woman who recognized when I first came to live with her that I was the kind of individual who would eventually make the best of that early loss, but it would take time. And I wouldn’t adjust the way other kids did.

Sure, at first I was depressed. And then I got mad that fate had dealt me this rotten blow.  Grandy, on the recommendation of the school counselor, sent me to a therapist. I knew that wouldn’t work out well, and I think Grandy did also. I wanted to do my adjusting my way. Grandy understood because she was the kind of person I was. She shrugged her shoulders when I said I had quit therapy and let me chart my own course through life. I emulated her tough but tender approach to living, and I think I’ve done well. I am fascinated by murder.  I think I either inherited or learned my snoopy nature from Grandy. Her maturity may have tempered her curious nature with caution, something that has yet to happen to me.

The other person who has influenced my life is my best friend, Madeleine Boudreaux Wilson. She and I are physical opposites, perhaps opposites in every other way also. Where I am tall, skinny and wear my hair in short, blonde spikes, she is tiny, red-haired, has the manners of a Southern lady and understands me better than anyone other than Grandy. Madeleine’s only flaw might be that she is a bit clumsy. I’ve compared her to a tiny elephant on steroids in a china shop. Her awkwardness has made it difficult for her to find and keep a man. Well, she finds them, but they soon discover she’s dangerous to be around. Once she inadvertently unleashed a herd of bulls on unsuspecting rodeo spectators. She kind of bumps into things and sometimes those things result in “accidents” that land her companions in urgent care. Luckily, I know this about her and stay out of her way. Besides, I’m quick on my feet. There are stores around here that do not allow Madeleine to shop in them. You know the scene where someone bumps cans stacked in a pyramid and knocks all of them down? Well, that’s my friend Madeleine. The only man unscathed by her awkwardness is David Wilson, the man she married. I don’t know if he’s just lucky or Madeleine is gaining in grace as she’s come to love the guy. Madeleine is probably responsible for reining me in when I get too carried away with my need to track down murderers.

But here’s why I’m suddenly at a mental crossroads in my usual in-your-face  approach to life. I married and divorced a man everyone told me wasn’t right for me. But, as I’ve said, I’m impulsive. So there was a wedding followed by his philandering, followed by his getting a mob boss’ daughter pregnant followed by our divorce followed by the mob boss and me becoming friends. It’s complicated. Anyway, I’m so over my ex-husband Jerry. I found a new love, a gorgeous private investigator, Alex Montgomery who made my toes curl the first time I laid eyes on him (kind of over a dead body). Alex is perfect except he doesn’t understand how involved I can get in murder cases, often his murder cases. He respects my mind for murder, just not my impulsive need to dabble in sleuthing.

Here’s my confusion. Into my life walks a Miccosukee Indian, tall, dark, muscular and yummy to his core, Sammy Egret. His grandfather and I have gotten to be close friends, and I’ve called on Grandfather Egret to help me with a case or two. But when Sammy and I see one another? It’s like a storm, lightening, thunder, winds and something that just vibrates between us. Do you think that might be love? I’m confused. Help me out here. What do you think?

BLOGGER Warning:
There is a small amount of violence that could be a trigger for very sensitive abuse survivors.

I would call this a classic cozy. You have enough wacky, eclectic characters to make every reader happy and throw in some possibly super normal mind reading. A cop who begrudgingly has to admit the amateur sleuth may be able to get results the police department can not or ARE NOT willing to look for. We even get some dysfunctional relationship adventures as a bonus.
There is a lot going on here besides a gruesome murder. Land rights disputes bring history back to reveal itself for Eve and Madeleine, who is dealing with new developments herself. Eve has a still present ex-husband, a possible boyfriend/next husband, and a really good friend who may want more. The only commitment Eve wants to make is to shelter the murder victim's daughter who feels lost and alone, allowing herself to become a victim of an abusive relationship.

Lesley retired from her life as a professor of psychology and reclaimed her country roots by moving to a small cottage in the Butternut River Valley in upstate New York.  In the winter she migrates to old Florida—cowboys, scrub palmetto, and open fields of grazing cattle, a place where spurs still jingle in the post office, and gators make golf a contact sport.  Back north, the shy ghost inhabiting the cottage serves as her literary muse.  When not writing, she gardens, cooks and renovates the 1874 cottage with the help of her husband, two cats and, of course, Fred the ghost, who gives artistic direction to their work.
She is the author of a number of mystery series (Microbrewing Series, Big Lake Mystery Series, Eve Appel Mystery Series and the Laura Murphy Mysteries), a standalone mystery (Angel Sleuth) and numerous short stories.