In a charming cozy mystery series debut, Leslie Nagel’s irrepressible small-town heroine finds that her fellow mystery book club members may be taking their Agatha Christie a bit too literally—and murder a bit too lightly. 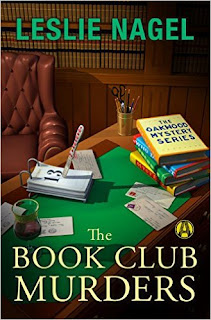 Charley Carpenter has poured heart and soul into her clothing store, Old Hat Vintage Fashions. She’ll do anything to make it a success—even join the stuffy Agathas Book Club in order to cultivate customers among the wealthy elite of Oakwood, Ohio.
Although mixing with the most influential women in town has its advantages, Charley finds the endless gossip a high price to pay. But after two women with close ties to the Agathas are brutally murdered, everyone falls under threat—and suspicion.
When key evidence indicates that both murders are the work of the same hand, Charley realizes that the killer has arranged each corpse in perfect imitation of crime scenes from the Club’s murder mystery reading list. She uses her membership in the Club to convince Detective Marcus Trenault to use her as an inside informant. Not that he could stop her anyway.
Intelligent, fearless, and every bit as stubborn as Marc is, Charley soon learns the Agathas aren’t the only ones with secrets to protect. Passions explode as she and Marc must race against time to prevent another murder. And if Charley’s not careful, she may find herself becoming the killer’s next plot twist.

I absolutely loved the mystery-book references and how the author brought in published mystery novels and used them in the murders.
~Nadaness In Motion

his was a really fun cozy mystery! …The Agathas are a bunch of interesting rich ladies who all have something they could be hiding.
~Books, Movies, Reviews. Oh my!

The mystery is extremely well-crafted and kept me guessing right up until the very end.
~Reading is My SuperPower

Leslie Nagel’s debut The Book Club murders introduces you to fun new characters and a story line that is filled with plot twists.~Shelley’s Book Case

I am really looking forward to seeing where this series goes, as the community, especially the book club, takes a substantial hit before the case is solved. The characters have so much potential. I only wish the romantic tension could have lasted and teased longer.  I am sure this is not a relationship that will run smoothly.
By the title you understand books and plots play a major role in the mystery.
For a cozy mystery addict, what is better than discovering links between favorite book deaths and a mystery to be solved? Of course, not as thrilling when you are the one who ends up in danger.
Charley really doesn't fit in with the other, more senior, book club members.
When she is finally appreciated, it is not for qualities she wanted or expected
They see her as a direct link to gossip and insider information.
This is where her strength and character is truly tested.
I also appreciated the vintage clothing aspect of the story. Throughout the book there are many small clues that get tied in well at the end. You will want to reread and see if you can spot them all.

Leslie Nagel is a writer and teacher of writing at a local community college. Her debut novel, “The Book Club Murders”, is the first in the Oakwood Mystery Series. Leslie lives in the all too real city of Oakwood, Ohio, where murders are rare but great stories lie thick on the ground. After the written word, her passions include her husband, her son and daughter, hiking, tennis and strong black coffee, not necessarily in that order.