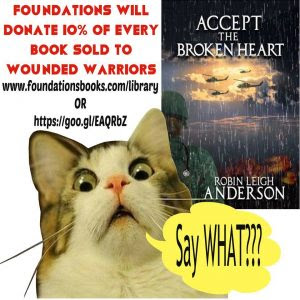 What can be said of Hell, when at its most quiet, I was most terrified? The explosions that had rocked every fiber of my being and made my bones feel like they could simply shatter like tempered glass still resonated. 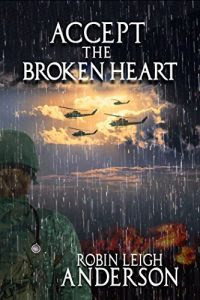 I looked over at the wounded, wondering if I had the same haunted look in my eyes, and thought I probably did. In this war, no one leaves. No one goes home...and everyone is a casualty of war.

Robin Leigh Anderson was born in the Montana Rockies and escaped to California in the early 1970s. She attended school in Montana, Washington State, and California, eventually settling in beautiful Santa Barbara with child and cats where she lived for 38 years before escaping sans grown child and late cats to Northern California. An advocate of reinventing oneself, Ms. Anderson dabbled in many of the major disciplines of life, providing fodder for the writing she pursued since she was eight. She has won numerous awards at writing conferences over the years, and was staff of the prestigious Santa Barbara Writer Conference for ten years. She has published numerous articles and short stories in her lifetime. She taught “crash-and-burn” intensive writing seminars in Santa Barbara and was the moderator of a writers’ critique group. She still conducts occasional seminars and enjoys editing others’ works, words being her all-consuming passion, as she writes in several genres.
Foundations, LLC on Facebook: https://www.facebook.com/foundationsbooks/
Publisher Website: http://www.foundationsbooks.net/