Life Outside the Box by Marilyn R Wilson 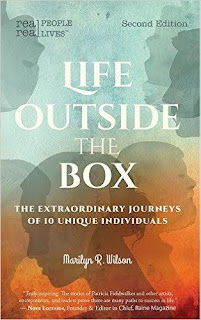 This second edition offers new content added to each and every chapter - personal author reflections from behind the scenes.

Get inspired to step out of your box and embrace your potential. From the corporate world, to the arts, to working with the disenfranchised, the message is clear: there is no such thing as a normal way to live your life and no one right solution to any problem. Selected from over a hundred interviews, the stories shared here open a window on the journeys of seven women and three men who have charted their own paths, including Ruthie Davis--top US luxury shoe designer and the winner of the 2014 AAFA Footwear Designer of the Year award; and Geir Ness whose perfume is a staple in Nordstrom, Disney World, and on Disney Cruise Lines. Enjoy a glimpse behind the scenes into the unique ways these individuals have chosen to deal with life's challenges and how they define success in their careers.

Romance and Humour – The Perfect Combo
by Marilyn R Wilson

I love reading a wide range of books. Depending on my mood I might choose to read fiction, non-fiction, biography, memoir, murder, mystery, spy....and the list goes on. Anything but horror, they give me nightmares. When I need a lighter read, I usually reach for a book that combines a pinch of romance with a dash of humour. Any added plots twists are simply icing on the cake.

While several authors come to mind, I do have two favourites. As I am a voracious readers, it's a good thing both are prolific writers with over 20 published titles to their name. Each have a very unique style, but both create books that put a smile on my face. Sometimes I laugh out loud.

Janet Evanovich is a #1 New York Times bestselling author. Of all her books, my hands down favourite are the 23 titles in the Stephanie Plum series. Each is a fun romp filled with hilarious situations and unforgettable characters.  The main character – Stephanie Plum – is a Jersey girl through and through. Job lost and bills mounting, she decides to accept work catching bail jumpers for her sleazy cousin Vinnie's bond office. She truly stinks at this job.

Other characters include Lula (a larger than life former prostitute who overflows her spandex outfits and draws drama like a moth to a flame), two hot men Plum can't choose between (Morelli, a sexy Italian cop she grew up with and Ranger, a mysterious Cuban/American security expert who sends her hormones raging), an appalled mum, a dad who tries to pretend all is normal in the household, a crazy Grandma Mazur, a hamster and Bob (a bulimic dog that eats everything in site and has gastric issues – enough said). And that is only a small a taste!

Each book's plot involves comedic scenes as Plum tries to arrest bail jumpers, amorous encounters with both men, family situations that will make you groan, funeral viewings with her grandma and Bob (again, enough said). I was stretched out on the couch while reading One For The Money and started laughing so hard I couldn't get up. Tears rolled down my cheeks.

Lauren Carr is an internationally bestselling author. I have read all her books, but my favourite is her Mac Faraday Mystery Series.  Here you have a mix of murder/mystery/intrigue interspersed with that same pinch of romance and dash of humour. Mac Faraday is a cop who hit bottom, loosing everything in an nasty divorce. BUT shortly after leaving divorce court he finds out he is the adopted son of a famous mystery writer who just passed. He is her sole heir.

Faraday has inherited a 5-star resort, a luxurious mansion and a hefty bank balance. His working days are over. There is a catch – well two. In residence is a large, very intelligent German Shepherd called Gnarly who is either creating havoc or helping to solve cases, and Archie Monday, a striking, intelligent woman who was his mother's editor and lives in the guest cottage. Faraday is instantly attracted.

Each book features a bit of romance and a mysterious murder tucked into the every day happenings of this resort town. Faraday's half brother David is the town sheriff. Missing the challenge of police work, Faraday manages to insert himself in David's cases, often with Gnarly in tow. The characters are everything you could hope for, from those with historically deep roots to rich, new residents wanting to throw their weight around.

Politics, feuds, social events, murder – a new twist is always in the works to fuel the plot and keep you reading. And while the romance may shift between characters, you'll soon learn Gnarly is often the main one carrying the humour torch.

Ready for a night of reading that will leave you with a smile on your face and a spring in your step?  Grab a novel offering that perfect mix of humour and romance. Murder too? A bonus! 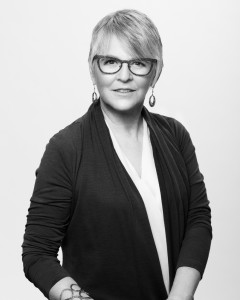 Marilyn R. Wilson is a freelance writer and speaker with a passion for interviewing. Her career as a writer began in an unusual way, by answering a Craigslist ad. It was while conducting her first interview the world shifted - she had found her passion. Since 2006, she has interviewed over 150 people from as near as her hometown of Vancouver, Canada, and as far away as South Africa.

​Whether through a random encounter on the New York subway or via a one-on-one interview with an internationally recognized artist, the goal is the same-to give wings to the unique journeys of inspiring individuals. This goal first led the author to co-launch a successful, innovative magazine focused on professionals working in the fashion industry paired with photography and illustrations by local artists. Then in 2015, Wilson took her passion to a new audience with the release of her first book, the first in a series featuring the lives of real people living real lives.