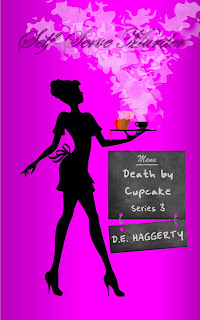 Kristie is kind with a capital K, so it’s quite the surprise when she wakes up next to a dead man with no recollection of the previous night. Even worse? She’s naked. Kristie may be a sweetheart out to save the world, but sticking her nose into an investigation of rapes across campus makes her the target of a murderer. Before she knows it, Callie is smack dab in the middle of a murder investigation with her colleagues Callie and Anna. If that’s not enough to drive a sane person up the wall, a friend has decided he’s going to keep her safe whether she wants him to or not. And, oh yeah, he’s her man and that’s that.
Come join us at Callie’s Cakes, where murder investigations are on the menu. You are most welcome, but you may need to serve yourself as our barista Kristie is busy trying to save the world.
Warning: Although there are plenty of moments that will make you shake your head and laugh at the antics of the ladies of Callie’s Cakes, the subject matter – rape on college campuses – is very real and somewhat darker than your usual cozy mystery.

I’m wiping down the counters when I get ambushed by Callie and Anna. Callie grabs my arm and together with Anna she pushes me into the corner furthest from the students. “What in the world of coffee beans are you guys up to now?” I cross my arms over my chest to make it perfectly clear that I’m not okay with whatever cockamamie scheme they’ve cooked up now.
Anna looks at me and smiles in an obvious but unsuccessful attempt to look innocent. “It’s just that we think it’s time we see the Youth Center where you spend all your time.”
Yeah, right. I roll my eyes at her. “You don’t really expect me to believe that you want to see the Youth Center to check out my life’s work.”
Callie bobs her head. “We’ve been meaning to go down there for ages.”
“Yeah,” Anna jumps in. “Logan always made it sound like the first circle in hell.”
I raise an eyebrow at the troublemaking pixie. Of course, she would want to jump into the first circle of hell. “Most people try to avoid Dante’s Inferno.” I don’t know why I bother trying to dissuade her. She obviously has no fear of things ‘normal’ people avoid like gangs and violence and such. She even admits to starting to fall for Logan before she realized he was an undercover cop.
“We just need to make sure we can eliminate anyone from the Youth Center as possible suspects. You know – up close and personally – then we need to find this rapist before he strikes again. It’s time to get to the bottom of this.” Callie makes an impassioned speech. I look down but, to my surprise, no soap box has magically appeared under her feet.
“I thought you guys promised not to go to the Youth Center.” I make one last ditch effort to keep Callie and Anna safely away from this investigation.
“I promised to not go running around. I will definitely not be doing any running.” Anna shakes her head and points at her feet. As if those high-heeled boots would ever stop her from running head-on into turmoil.
Callie shrugs. “I never actually said the words ‘I promise’. There’s definitely some kind of loophole there.”
“Fine!” I throw my hands in the air in defeat. “We’ll head over in my car after the bakery closes this afternoon.”
The dynamic duo immediately jumps up and down before rushing back into the kitchen giggling. And I’m the young one?

This is a nontraditional cozy mystery dealing with a very important yet sensitive topic.
I loved the three women looking into the mystery and attempting to bring change and take action where the authorities are not. When you discover who is the perpetrator, I hope it makes you angry because it is very plausible. Even the campus police receptionist is to be applauded and admired.
But these strong, spirited, intelligent women, especially Kristie, accepting caveman behavior from the men in their lives was too over the top for me. Even as I could see the women "handling" the men.
Tyler, who I wanted to like, to see his positive traits, could not overcome the "ick factor" of calling Kristie "baby" upon first contact. It was too much to soon and too often.
The story pace is fast and the women put themselves into troublesome situations more darkly humorous than dangerous. Since the duo of friends have already solved murders before her, Kristie feels she can't let this one go. Definitely too close to home. 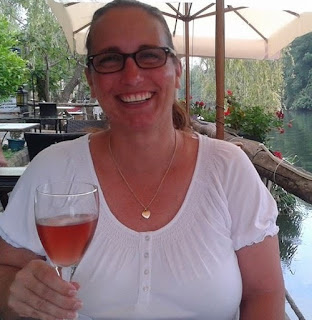 I grew up reading everything I could get my hands on from my mom’s Harlequin romances to Nancy Drew to Little Women. When I wasn’t flipping pages in a library book, I was penning horrendous poems, writing songs no one should ever sing, or drafting stories which have thankfully been destroyed. College and a stint in the U.S. Army came along, robbing me of free time to write and read, although I did manage, every once in a while, to sneak a book into my rucksack between rolled up socks, MRIs, t-shirts, and cold weather gear. After surviving the army experience, I went back to school and got my law degree. I jumped ship and joined the hubby in the Netherlands before the graduation ceremony could even begin. A few years into my legal career, I was exhausted, fed up, and just plain done. I quit my job and sat down to write a manuscript, which I promptly hid in the attic after returning to the law. But being a lawyer really wasn’t my thing, so I quit (again!) and went off to Germany to start a B&B. Turns out being a B&B owner wasn’t my thing either. I decided to follow the husband to Istanbul for a few years where I managed to churn out book after book. But ten years was too many to stay away from ‘home’. I packed up again and moved to The Hague where I’m currently working on my next book. I hope I’ll always be working on my next book.
Author links:
Website: http://dehaggerty.wordpress.com
Blog: https://dehaggerty.wordpress.com/category/mymusings/
Facebook: https://www.facebook.com/dehaggerty
Twitter: https://twitter.com/denaehaggerty
Google+: https://plus.google.com/u/0/+DEHaggerty/posts
Pinterest: http://www.pinterest.com/denahaggerty/
Goodreads: https://www.goodreads.com/author/show/7210211.D_E_Haggerty
Amazon author page: http://www.amazon.com/D.E.-Haggerty/e/B00ECQBURU/ref=sr_ntt_srch_lnk_5?qid=1438239628&sr=8-5