Professional organizer Maggie McDonald has a knack for cleaning up other people’s messes. So when the fiancée of her latest client turns up dead, it’s up to her to sort through the untidy list of suspects and identify the real killer. 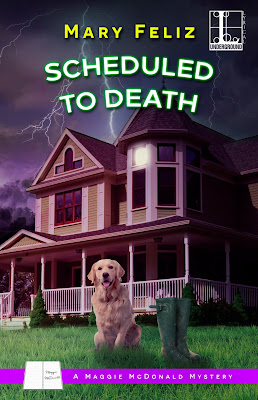 Maggie McDonald is hoping to raise the profile of her new Orchard View organizing business via her first high-profile client. Professor Lincoln Sinclair may be up for a Nobel Prize, but he’s hopeless when it comes to organizing anything other than his thoughts. For an academic, he’s also amassed more than his share of enemies. When Sinclair’s fiancée is found dead on the floor of his home laboratory—electrocuted in a puddle of water—Maggie takes on the added task of finding the woman’s murderer. To do so, she’ll have to outmaneuver the suspicious, obnoxious police investigator she’s nicknamed “Detective Awful” before a shadowy figure can check off the first item on their personal to-do list—Kill Maggie McDonald.

“Hi, Linc,” I said. “Are you settling in at the lab? Dodging reporters?”
He didn’t answer immediately and I grew alarmed. “What’s wrong? Are you there?” As I said the words, I felt sheepish. I’d overreacted. It was probably just a bad connection with a long delay.
“I’m fine, Maggie. I’ve had a little trouble with my bicycle, I’m afraid. I took a tumble and Newton's hurt. I’m reluctant to ask for another favor, but would you be willing to pick us up at the house and take us back to campus? My vet isn’t far from here, but I don’t think Newton will be comfortable walking.”
“I’ll be right there,” I said, knowing from experience with the kids that it was more important for me to arrive quickly in a crisis than it was to have answers to all my immediate questions.
“Don’t hang up, Maggie. Are you still there?”
“Still here,” I said as I scrambled for my keys and my backpack.
“Do you have an old sheet or a beach towel we can put on the seat for Newt? I don’t want him to stain your car.”
“I’ll find something.” I hung up the phone and tore down the basement steps to the laundry room. I’d cleared out our oldest and most worn sheets before we’d moved, not thinking that moving often requires painting, and painting requires tarps and cleaning rags. But the kids had changed their beds over the weekend, and I’d thrown the clean ones in the dryer this morning. I reached in and grabbed an armful of red and blue plaid cotton and raced back up the stairs. I wasn’t too worried about my car’s upholstery—I knew a million ways to remove bloodstains.
Fresh, clean sheets would be better than old rags or towels at sopping up blood without introducing foreign material into Newton’s wounds. I tried not to worry as I drove as carefully as I could, repeating a police driving-course mantra that Jason Mueller had once told my boys: “Slow is smooth. Smooth is fast.”  The phrase had originated in the armed services, he'd told them, and referred to aiming and shooting a firearm. But it applied equally well to driving.
What he didn’t say was that slow is also really difficult.

I had not read the previous book in this series and was able to follow along just fine.This is one of those cozy reads where a whole community of personalities comes together to solve the crime. As they should this time, because the victim is one of their own.I had a difficult time deciding who was my favorite character in this book. Each is well rounded and has something special bout them. On the surface it is about understanding how Sarah came to be dead in a puddle of water in her fiance's house, discovered the morning after a bad storm. Why was she there to begin with? As the book draws us in and the story unfolds, we realize how little we may know about the people we call friends. Who is to blame?We are offered tips at the beginning of each chapter regarding home and time organization.This storyline also deals with timely and sensitive social issues.How this book differed from some others was how closely the official police worked with the amateur sleuths, albeit behind the back of the inept detective in charge of the case.I enjoyed the book and will go back and read the first book in the series.

Mary Feliz has lived in five states and two countries but calls Silicon Valley home. Traveling to other areas of the United States, she’s frequently reminded that what seems normal in the high-tech heartland can seem decidedly odd to the rest of the country.
A big fan of irony, serendipity, diversity, and quirky intelligence tempered with gentle humor, Mary strives to bring these elements into her writing, although her characters tend to take these elements to a whole new level.
She’s a member of Sisters in Crime, Mystery Writers of America, and National Association of Professional Organizers.
Mary is a Smith College graduate with a degree in Sociology.
She lives in Northern California with her husband, near the homes of their two adult offspring.
Visit Mary online at MaryFeliz.com, or follow her on Twitter @MaryFelizAuthor.