Cherry Cake and a Cadaver
by Susan Boles

Ms. Boles has a good sense of mystery, and using clues to lead the reader down the right path to guessing the outcome, if the reader is paying close attention.
~Lisa Ks Book Reviews
Ms. Boles is a master baker of cozy mysteries. The multiple story elements are mixed together just right and make Cherry Cake and a Cadaver a worthy addition to the series and a tasty read in its own right.
~Back Porchervations 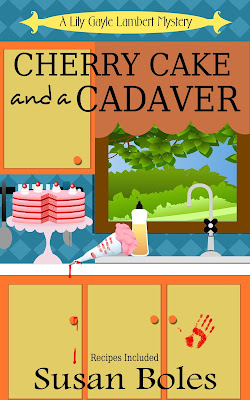 Synopsis
Lily Gayle and the gang set out to find a killer after local baker Luxen Natolovich is found dead hours before the grand opening weekend at the new Bed and Breakfast in town, Midnight Dragonfly. As Lily Gayle deciphers the clues around Luxen’s death she uncovers a conspiracy of lies and half truths that could very well be tied to a refugee camp in Mississippi during World War II. The deeper Lily Gayle digs, the deeper the conspiracy runs, and the closer she comes to being the killer’s next victim. 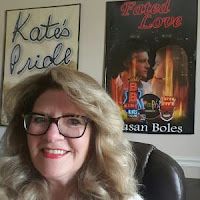 Susan calls McNairy County, TN her home ground even though she has moved away. It was here, at Bethel Springs Junior High School that she began her writing career with two friends. They formed their own little writers group that was so secret they were the only ones who knew it existed. She still has some of the stories they wrote carefully preserved in a loose leaf binder and tucked away for safety.
She has worked in retail management, briefly for the Census Bureau and for many years in the investment/insurance industry in the regulatory compliance arena. All of which are left brain activities. So she exercises her right brain activity with reading and writing…just to keep both sides even.
Reading has been a passion since she was very young. As a toddler, her mother read to her from her ‘baby books’ and her Mother tells a story about her holding one of them upside down and ‘reading’ by repeating the story verbatim from memory.
Death of a Wolfman is the first in the Lily Gayle Lambert mystery series. Her previously published romantic suspense novel, Fated Love, is a contemporary paranormal romantic suspense (with a twist of paranormal) set in Memphis, TN. Her first novel, Kate’s Pride, is a historical women’s fiction set in West Tennessee in the aftermath of the Civil War. The novel is loosely based on her own Great Grandmother and published under the pen name Renee Russell.
Life got in the way of writing for many years but now she’s come back to her early love.
Author Links:
Webpage – www.susanbolesauthor.com
Twitter – @SusanBAuthor
Blog – https://susanbolesauthor.wordpress.com
Facebook – https://www.facebook.com/lilygaylelambertmysteries/
Linked In – https://www.linkedin.com/in/susan-boles-author-a4075484
GoodReads – https://www.goodreads.com/author/show/14866595.Susan_Boles
Purchase Links – Amazon

Hi everyone. Ben Carter here. I'm the sheriff of Barkley County, Mississippi. I live in the county seat, Mercy, and my office is there too. I was born and raised in Mercy. I went to Ole Miss at the same time as Lily Gayle, and keeping an eye on my cousin was a job all in itself. She managed to get herself involved in mysteries even back then. After Ole Miss, I went to work in Jackson, MS on their police force and then to Natchez, MS. But when the job opened up here, I knew I wanted to come home.
I thought it would be quiet here. It always was when I was growing up. But I guess times change, even in backwaters like Mercy, Mississippi. I was pretty surprised about the wolf man case we had a few months ago. You could have knocked me over with a feather. I thought I knew everything about every family in this town. Which just goes to show you that when you start thinking that way you're bound to discover something unsettling.
And this time around, our local bakery owner turning up dead at the fixin' to open bed and breakfast out from town was a real shocker. And trying to keep Lily Gayle from sticking her nose into the case was about as easy as herding cats. Which means, that ain't happening. She's a good woman though. Got a good head on her shoulders, too. But if you tell her I said that I'll deny it to the death. She comes up with some good information for me and we manage to solve the crimes pretty quick.


Come visit with all of us in Mercy. Cherry Cake and a Cadaver might me just what you need.

This is a very light weight cozy. I appreciated the sassy southern mature characters.
They referenced a previous murder involving a wolfman. I would have liked more information to better understand how it affected Lily Gayle's though processes.
LG sure seems like a handful, and adding in the spirited Miss Edna makes for endless possibilities. Dixie seems to add a calming factor, not that she can settle the ladies down when they get a bee in their bonnet.