Secrets of Death by Stephen Booth 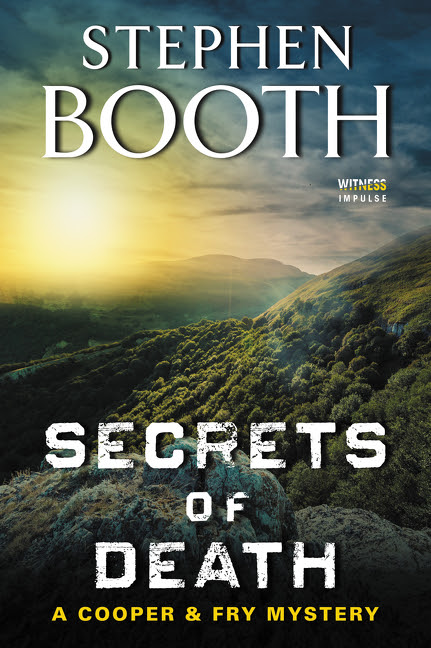 Residents of the Peak District are used to tourists descending on its soaring hills and brooding valleys. However, this summer brings a different kind of visitor to the idyllic landscape, leaving behind bodies and secrets.
A series of suicides throughout the Peaks throws Detective Inspector Ben Cooper and his team in Derbyshire’s E Division into a race against time to find a connection to these seemingly random acts — with no way of predicting where the next body will turn up. Meanwhile, in Nottingham Detective Sergeant Diane Fry finds a key witness has vanished...
But what are the mysterious Secrets of Death?
And is there one victim whose fate wasn’t suicide at all? A newspaper and magazine journalist for over 25 years, Stephen Booth was born in the English Pennine mill town of Burnley. He was brought up on the Lancashire coast at Blackpool, where he attended Arnold School. He began his career in journalism by editing his school magazine, and wrote his first novel at the age of 12. The Cooper & Fry series is now published by Little, Brown in the UK and by the Witness Impulse imprint of HarperCollins in the USA. In addition to publication in the US, Canada, Australia and New Zealand, translation rights in the series have so far been sold in sixteen languages – French, German, Dutch, Italian, Swedish, Danish, Finnish, Norwegian, Spanish, Portuguese, Russian, Czech, Romanian, Bulgarian, Japanese and Hebrew.Stephen left journalism in 2001 to write novels full time. He and his wife Lesley live in a village in rural Nottinghamshire, England (home of Robin Hood and the Pilgrim Fathers). They have three cats. In recent years, Stephen Booth has become a Library Champion in support of the UK’s ‘Love Libraries’ campaign, and a Reading Champion to support the National Year of Reading. He has also represented British literature at the Helsinki Book Fair in Finland, filmed a documentary for 20th Century Fox on the French detective Vidocq, taken part in online chats for World Book Day, and given talks at many conferences, conventions, libraries, bookshops and festivals around the world.