TREASURE IN PARADISE
by Kathi Daley 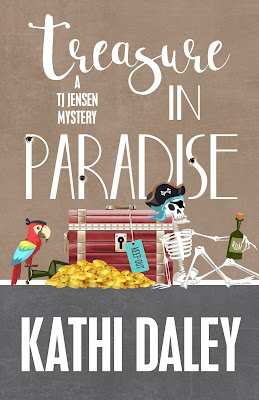 Tj Jensen and her family head to Turtle Cove Resort for summer vacation, but their plans for rest and relaxation are thwarted when they find a dead treasure hunter in the attic of the resort’s main house. Initially vowing not to get involved, Tj quickly changes her tune when the Gull Island deputy on the case closes it after a bare bones investigation. All evidence points to foul play, and Tj’s determined to uncover what the deputy wants to keep hidden. With the help of her best friend and a chatty parrot, Tj digs up a centuries old legend, a hidden map, and secrets buried deeper than pirate’s treasure 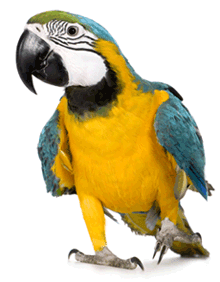 Animals are always a big part of the mysteries I write. In my opinion it is the animals who most often provide the heart and the humor of the story. In Treasure in Paradise we have a guest pet – a parrot named Blackbeard - who helps solve the crime by telling Tj just what she needs to know when she needs to know it. Here is a short excerpt with Blackbeard. In this scene Tj is speaking on the phone to Blackbeard’s owner Garrett Hanford who is in the hospital.

Tj glanced out the window to where Kyle was playing with Gracie and Blackbeard on the beach. “We’ve had a lot of fun with him. He seems to actually be communicating and not just parroting words back to us.”
“Oh, Blackbeard can communicate. Don’t doubt that for a minute. He uses words he knows, but the meaning is clear. When he’s hungry he’ll say ‘feed the bird,’ and when he gets mad at me he tells me to ‘walk the plank.’ He’s very intelligent.”
“Any idea what ‘Charlie bad’ might mean?”
Garrett didn’t answer right away. Then he said, “I don’t have a clue. We like to watch Charlie Chaplin movies, but I’ve never heard him refer to Charlie as bad. I’ve heard him mention ‘Charlie’s hat.’ He seems fascinated with that hat. We watched Charlie’s Angels, but Blackbeard usually would just say ‘pretty girl’ or ‘what a babe.’ I can assure you he learned that from his previous owner as well.”
“Have you ever heard him use the word bad in any other context?”
“Yeah. He seems to understand the concept of bad, which is amazing if you think about it. To be honest, I tend to take the fact that Blackbeard can communicate so well for granted.”
“I must say, Blackbeard is the smartest bird I’ve ever seen.”
“He is. Did you know he was the one who called for help when I had my stroke?”
Garrett has an old corded phone in the kitchen. “He can dial a phone?”
“No, but he can knock the handset off the receiver and peck at my speed-dial buttons. He happened to call Rick, although even I don’t think that was intentional. When Rick answered he said, ‘Man overboard,’ and Rick came running.”

You’ll have to read the book if you want to know what Charlie was trying to tell Tj when he kept saying Charlie Bad. It actually turned out to be a juicy clue that led them down a path they may otherwise have not explored.

It is difficult to name a favorite series by Kathi Daley but TJ Jensen and friends is always at the very top of the list for me. I love the interaction between the characters. It is a wholesome, multigenerational series.
This time TJ agrees to watch over resort renovations for a friend of her father. Having grown up in a resort setting, she is the perfect person for this task. Even better, she brings along family, friends and pets for this extended stay. Also, we meet a most remarkable parrot named Blackbeard.
With a beach setting, we naturally anticipate pirate adventure. There is treasure hunting featured from the very first day. Finding a dead treasure hunter in the attic sets the tone for the struggles TJ and crew will face this summer.
A combination of local secrets, greedy land developers, devout environmentalists, moody preadolescents and TJ's own emotional ride mixed with memories and recent relationship changes, investigating a murder seems to be the logical choice for our amateur sleuth.
Loyalty is her strongest trait, along with persistence.
The ending did make me gasp! 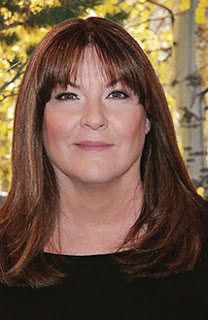 Author of the Zoe Donovan cozy Mystery Series, Tj Jensen Paradise Lake Mystery series, Whales and Tails Cozy Mystery Series, Sand and Sea Hawaiian Mysteries, and Seacliff High Teen Cozy Mystery Series.
Come for the murder, stay for the romance.
Kathi lives in the beautiful alpine community of Lake Tahoe with her husband Ken and dog Echo. When she’s not writing she enjoys hanging out on the beach with her children and grandchildren. During the summer she enjoys hiking, kayaking, mountain biking, wakeboarding, and sunset cruises on the lake. During the winter she enjoys cross country skiing, snowshoeing, and curling up by a fire with a good book.
Kathi uses her mountain home as inspiration for her books, all which include appearances by the wildlife she shares her life with.
Visit Kathi Daley:
Blog – http://kathidaleyblog.com
Facebook at Kathi Daley Books, www.facebook.com/kathidaleybooks
Kathi Daley Teen – www.facebook.com/kathidaleyteen
Kathi Daley Books Group Page – https://www.facebook.com/groups/569578823146850/