BAD TO THE BONE

BAD To The BONE
by Linda O. Johnston 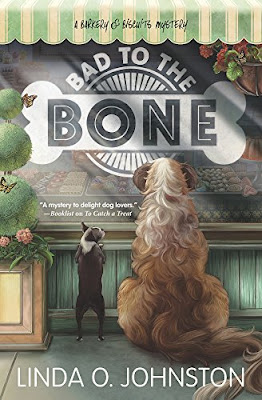 Bad to the Bone (A Barkery & Biscuits Mystery)

Veterinary technician Carrie Kennersly, owner of the Barkery & Biscuits bakery for dogs, is reluctant to sell her recipes to pet food manufacturer VimPets. Jack Loroco, a VimPets representative, assures Carrie that it would be a great opportunity to grow her business. His promising new relationship with Carrie’s friend, Billi Matlock, doesn’t hurt his cause. But the budding romance takes a bad turn when Wanda Addler, another VimPets employee, sets her sights on Jack.
After threatening to ruin Jack’s career if he doesn’t give her what she wants, Wanda is found dead. Jack and Billi are put at the top of the suspect list, and Carrie is doggone determined to rescue them from a life behind bars.

While Carrie is a huge animal advocate, her interests and the people she associates with are often the source of her difficulties. After another murder occurs among her circle of acquaintances, her friends both advise her not to get involved and seem to assume she will be in the thick of it. At least this time she is not a suspect.The local pet food representative is also a huge flirt. Could he literally be a lady killer? That is the question when the woman pushing for his job ends up dead. Carrie is as concerned about future rescue events and business promotions as she is about finding out who killed the annoying Wanda. Dr. Storme is much more a part of Carrie's life these days but he is still not a warm and lovable character. Her brother Neal seems to be the best male in Carrie's life.The woman who ends up dead is so unlikable that it's possible it is not even her work life that motivates someone to kill her, but that is the only angle Carrie knows about. Carrie's main concern is that none of her friend's take the fall.As usual, the dogs add a much needed lighter and cuddly element to this cozy series. 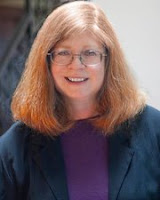 , a spinoff from her Kendra Ballantyne, Pet-Sitter mysteries

for Berkley Prime Crime, and Harlequin Romantic Suspense as well as the Alpha Force paranormal romance miniseries for Harlequin Nocturne.  She additionally writes the Superstition Mysteries

for Midnight Ink.  Her latest cozy mystery series, the Barkery and Biscuits Mysteries

are also from Midnight Ink.