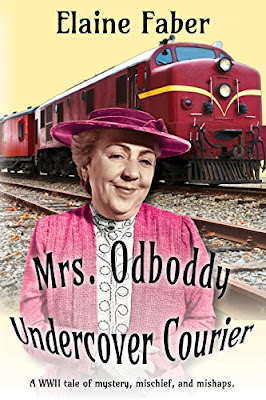 Purchase Links – Amazon  B&N
She meets Irving, whose wife mysteriously disappears from the train; Nanny, the unfeeling caregiver to little Madeline; two soldiers bound for training as Tuskegee airmen; and Charles, the shell-shocked veteran, who lends an unexpected helping hand. Who will Agnes trust? Who is the Nazi spy?
When enemy forces make a final attempt to steal the package in Washington, D.C., Agnes must accept her own vulnerability as a warrior on the home front.
Can Agnes overcome multiple obstacles, deliver the package to the President, and still meet Mrs. Roosevelt’s plane before she leaves for the Pacific Islands?
Mrs. Odboddy: Undercover Courier is a hysterical frolic on a train across the United States during WWII, as Agnes embarks on this critical mission.


My name is Agnes Agatha Odboddy. My friends call me Agnes. I live with my Siamese cat, Ling-Ling, and my beautiful red-headed granddaughter, Katherine. Oh, yes, MY hair is also red. Quite natural, I assure you. Oh, I may freshen it from time to time with a henna rinse but I would never dye it, because only fast women and European spies do that. I should know. I saw enough of them during WWI as an undercover agent for the US government.

Thanks to the way I handled myself last year with an affair of national security, (Mrs. Odboddy Hometown Patriot) Colonel Farthingworth from the local military base asked me to carry a package to President Roosevelt, since Katherine and I were headed to Washington to join Mrs. Roosevelt’s Pacific Island tour. What better way to not draw attention to the package than to have it carried by a plump, red-headed, elderly, eccentric old gal like me? Naturally, I assumed the package contained secret war documents too sensitive to travel through the mail. I fully expected evil-doers to get wind of our plans. As a retired WWI undercover agent, I felt confident that I could thwart any attempt on the part of a Nazi spy to steal the package. My stars, yes! We saw some action in 1918, but I never hurt anybody. Well, there was that one time… Of course, I can’t talk about the details. If I did, I’d have to kill you.

Mrs. Odboddy Undercover Courier mostly takes place on the train between California and Washington, D.C. It is a hysterical romp across the U.S.A. during WWII as I prove, yet again, that even old ladies can be home front warriors. Along the way, I’m forced to take risks and deal with the consequences of pitting my intuition and skills against the most diabolical enemy agent. We meet two soldiers headed for training as Tuskegee airmen who run afoul of the Jim Crow laws in Tennessee. Then there is the insensitive caregiver to a delightful child who steals Katherine’s heart, and we experience first-hand the diabolical schemes of how J. Edgar Hoover treated Mrs. Roosevelt!
All that may sound pretty dull, but I assure you, there is a laugh a minute throughout the book. Katherine says my wild imagination always gets me into trouble but I’m never wrong…well…mostly never wrong. I know a Nazi spy when I see one…usually. There was that one time when I thought there was a Nazi plot involving stolen ration books…but that’s another story.
In the exciting conclusion to Mrs. Odboddy - Undercover Courier, I come face to face with the enemy agent and I’m forced to accept my own limitations when dealing with younger, stronger enemy forces. Are my undercover warrior days over? Not on your tintype! Not as long as there’s henna in the shampoo jar and breath in this old body.
Mrs. Odboddy shall live to fight another day.

Coming soon. Mrs. Odbody – And Then There Was a Tiger.

I became acquainted with Mrs. Odboddy in a previous book but this adventure reads just as well as a stand alone. I recommend it for fans of historical fiction as well as those who appreciate some humor in their crime novels.
Mrs. O is one of a kind. Having been an agent in a previous role, she always thinks she sees something suspicious in the behavior of others. When she is given a secret mission and a package to deliver into the hands of the President of the United States, her intuition and observations go into high alert status. Can her granddaughter Katherine keep her under control?
Halfway through the book I was convinced I had it figured out but there were more surprises ahead.
I enjoyed the character interactions and individual traits. The author writes amazing descriptions, incorporating valuable facts from history.
This is a wild train ride and dangerous adventure.
I look forward to discovering how Mrs. Odboddy carries out her civic duty next time. 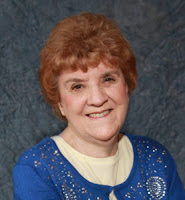 Elaine is a member of Sisters in Crime, Inspire Christian Writers and Cat Writers Association. She lives in No. Calif with her husband and four house cats (the inspiration for her three humorous cozy cat mysteries, Black Cat’s Legacy

, Black Cat and the Lethal Lawyer

, and Black Cat and the Accidental Angel

).
Mrs. Odboddy’s character is based in no way on Elaine’s quirky personality. Two more Mrs. Odboddy adventures will publish in the near future. Many of Elaine’s short stories have appeared in magazines and multiple anthologies.