As we go through the lists of suspects you will be changing your mind and I was really surprised as to whom the culprit was.~Maureen’s Musings 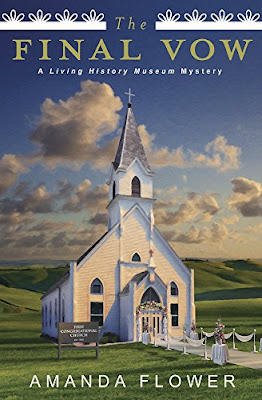 Summer weddings in Barton Farm’s picturesque church are standard procedure for museum director Kelsey Cambridge. At least they were until the Cherry Foundation, which supports the museum, orders Kelsey to host her ex-husband’s wedding on Farm grounds.
Ambitious wedding planner Vianna Pine is determined to make the bride’s Civil War-themed wedding perfect. But each time Vianna’s vision threatens the integrity and safety of the Farm, Kelsey has to intervene.
When Kelsey finds Vianna’s dead body at the foot of the church steps, everyone’s plans fall apart. With both the wedding and Barton Farm at risk of being permanently shut down, Kelsey has to work hard to save her own happily ever after.

I have been involved in bad relationships, and reinactment theatre on living history properties so am always glad to see another book in this cozy series.
This series feels like coming home to me, except that around me, people don't tend to be murdered.The heroine, Kelsey, is a hard working single mom with something of a superhero complex. She needs to fix everyone's problems. Being the director and on-site problem solver of a living history museum requires her to juggle and solve multiple problems daily while dealing with many personality types.She could never have predicted the latest Bridezilla to demand a wedding on the Farm property would be marrying Kelsey's own ex-husband. As much as she desires not to get involved when the wedding planner ends up dead on Farm property, she has a history with the detectives who are grilling her friends. Kelsey can not stay out of the thick of this investigation.If you like strong friendships with your cozies, this is a series you will enjoy.Many secrets will be revealed.

Amanda Flower, a two-time Agatha Award-nominated mystery author, started her writing career in elementary school when she read a story she wrote to her sixth grade class and had the class in stitches with her description of being stuck on the top of a Ferris wheel. She knew at that moment she’d found her calling of making people laugh with her words. She also writes mysteries as national bestselling  author Isabella Alan. In addition to being an author, Amanda is an academic librarian for a small college near Cleveland.
Author Links:
Website: http://amandaflower.com/
Pen Name Website: http://isabellaalan.com/
Facebook: https://www.facebook.com/authoramandaflower
Twitter: https://twitter.com/aflowerwriter
Goodreads: http://www.goodreads.com/author/show/3412728.Amanda_Flower
Pinterest: http://www.pinterest.com/aflowerwriter/ 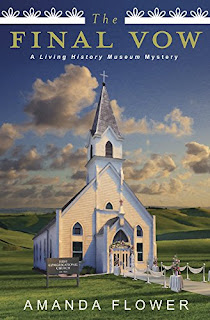