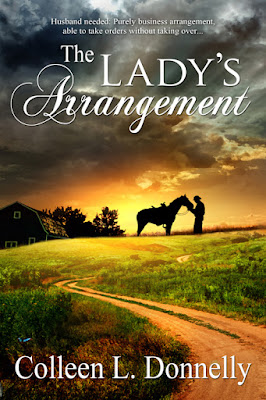 Neither Rex nor Regina wants a spouse, but they do have needs.

Ranger Rex Duncan needs a false identity—just long enough to uncover a ring of Kansas ranch thieves. Answering Regina’s ad for a temporary husband, he leaves his beloved red dirt of Oklahoma to assume that disguise. But the most obstinate woman he’s ever known confounds his assignment, and with hair the red color that has always made his heart beat a little faster.

Regina Howard needs a new Mrs. in front of her name—just long enough to reclaim her deceased husband’s ranch, since Kansas law won’t allow women to own property. When Rex answers her ad for a husband who can take orders as part of a brief business arrangement, she finds this stubborn man ignores her every command. Yet a good man is far more than just a name…

I stepped between him and Ted, tired of this man robbing me of the very ground Flynn was buried in.

“Stealing a ranch from its rightful owner is breaking a law. Have you even sent copies of the paperwork to my father’s attorney like I told you to?”

“If you’re referring to yourself as the rightful owner, you’re not.” Mr. Gulliver barely concealed a twitch I wouldn’t be surprised was the beginning of a sneer. “Women can’t be entitled to land, no matter what the deed says. The new owner for your ranch is…”

“A man. That’s what the law says, and the new owner is a man. He’s right here, in fact.” I spun in the dirt, looked into the dark eyes of Ben Miller, who’d made the mistake of standing in my barn a minute too long. I marched his way, daring him to move as I advanced. “You can keep your saddle over there.” I tipped my head to where Ben’s saddle had just been. Flynn’s spot. I snaked a hand around Ben’s arm and locked him in place as I turned to Mr. Gulliver, and the gaping stare of my ranch manager. “Meet my new husband. Or he will be soon. Probably tomorrow.”

“Ma?” Jess. I heard the strain in his twelve-year-old voice. I turned to an even more sickly strain on his face.

He was gone before I could say more, the slender back of my son leaning into a run that would take him even farther from me than earlier today when he left me standing at his father’s grave.
I dropped Ben’s arm. “Jess!” 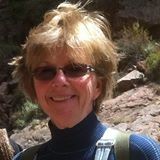 Born and raised in the Midwest, Colleen earned a four-year degree in Medical Technology and used it to travel and explore other parts of the country while working in the field of science.

Outside the laboratory she delves deeply into literature, both reading and writing, her interest piqued by tales involving moral dilemmas and the choices people come up against.

A lover of the outdoors as well as a comfy living room, Colleen is always searching inside and out for the next good story.