KNOT WHAT YOU THINK

Knot What You Think (A Quilting Mystery) by Mary Marks 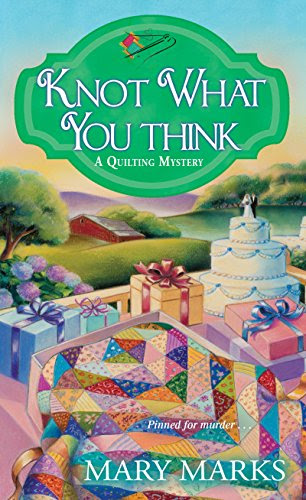 Knot What You Think (A Quilting Mystery)

The newest member of Martha’s close-knit quilting circle has an eye for couture. But when the designer’s fingerprints are found blanketing a crime scene, Martha must prove that he didn’t have a hand in homicide! Martha Rose is alarmed by the discovery of Dolleen Doyle’s dead body, especially when evidence suggests a fellow quilter committed the crime. Set on clearing her pal, Martha searches for answers—but with ties to a convicted fraudster’s stolen millions and a secret office room, the victim’s past raises even more questions. As Martha inches towards the culprit, she learns that wrapping the case up—and living to baste another square—will be trickier than she ever imagined . . .

WHO ARE MY CHARACTERS?
Mary Marks

Some readers ask, “Are your characters real people?” Or, “Who is Martha, really?” At other times, quilters I know have come to me and said confidentially, “I know who [name a character] is. I’m right, aren’t I?”
The short answer is Yes and no. Very few of my characters are inspired by actual people, but when they are, the details are always embellished and always changed. Take Martha for example. Like me, she is divorced, Jewish, overweight, suffers from fibromyalgia, lives in the San Fernando Valley and is a quilter. She is curious, fiercely loyal and hates injustice. Unlike me, however, she is in her fifties (alas, I’m older), actively dates, stumbles across dead bodies, and solves crimes. Oh. And I never spent a night in jail like she did in Forget Me Knot. So I know Martha intimately, and have no trouble getting inside her head.
Lucy is another character loosely based on a real person, my late sister-in-law. Mici was a tall, slender, red head, and impeccably put together in outfits that always matched. She was one of the most creative and talented people I’ve known, although she was never a quilter. And like Lucy, she grew up in Moorcroft, Wyoming. So, whenever Lucy appears on the page, I try to imagine how Mici would react. But the details of Lucy’s personal life are completely imaginary.
Birdie Watson also has some factual origins, but  she is a hybrid. One of her characteristics (the ubiquitous overalls and Birkenstocks) was inspired by a close quilting friend, who was amused to see herself appear on the pages of my books. And part of Birdie’s back story (accidentally driving through the wall of a quilt store) actually happened to another quilting friend, also delighted to see her story in print. But the details of Birdie’s life, both as a former hippie and her marriage to Russell, are purely fictional. So when she appears on the page, I try to imagine how a certain “type” of individual would react.
When creating a new character, it helps to visualize a real person who might look like or act like my fictional individual. For instance, when LAPD Detective Arlo Beavers first appeared on the page, I pictured my friend’s husband, a retired LA Deputy Sheriff. Tall, white hair and mustache, and very handsome. And when he spoke, I heard the sexy drawl of actor Sam Elliot and remembered his nice, tight jeans. (Who wouldn’t fall hard for a guy like that?)
Crusher, aka Yossi Levy, appeared in my head looking like a much larger version of two rabbis I’ve known. Both real men are barrel chested and bearded. Both are religious but unconventional in different ways. But the details of Crusher’s life as an ATF agent and love affair with Martha are purely my invention.
When I created Jazz Fletcher, I didn’t want him to be a stereotyped gay man, or an exaggerated cartoon figure. So, I pictured that dignified fashion icon, Tim Gunn (who I’d love to be my best friend). I tried to imagine how someone like him might react. As a result, Jazz became a fashion designer and constant critic of Martha’s wardrobe.
Here’s a little secret. A couple of my fictional scoundrels are based on real villains in my life. I’ve derived great satisfaction from exposing their offenses and seeing them punished in my stories. That’s one of the cool perks of being a writer.


I’ve had over seven decades to study human behavior. There is almost nothing I haven’t experienced, witnessed, or read about. So as I write, I dip into of this vast personal library of observations to enrich and deepen the characters I draw. Sometimes with humor and sarcasm, sometimes with anger, but always with the idea of entertaining my readers with a good story.

The years may be piling up with this group of friends but they are as tight as ever.Along with a wonderfully nosy cozy we get insight into Jewish high traditions and celebrations and some sage quilting advice.I love the characters in Mary Marks's quilting mystery series. Some people prefer to spend their senior years more sedataely, but when Martha, Lucy and Birdie get together, you can not predict what will happen. Add in their most recent and somewhat unlikely new quilting circle member, Jazz, and there is nothing quiet or predictable about this story.That goes even without mentioning the tension between Martha's ever hopeful live-in boyfriend and her too often present ex-lover, both of whom are macho types, both in law enforcement.Love is in the air- but who does cupid have in his sight?I felt the psychic references added something extra to the investigation and enjoyed the happenings.

About the Author
Born and raised in Los Angeles and the San Francisco Bay Area, Mary Marks earned a B.A. in Anthropology from UCLA and an M.A. in Public Administration from the American Jewish University in Los Angeles. In 2004 she enrolled in the UCLA Extension Writers Program. Her first novel, Forget Me Knot, was a finalist in a national writing competition in 2011.
She is currently a reviewer of cozy mysteries for The New York Journal of Books at www.nyjournalofbooks.com.