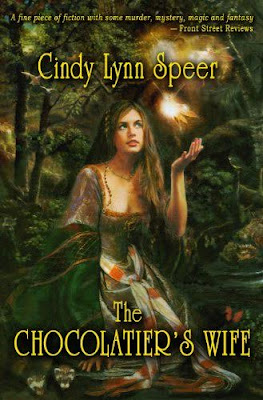 When Tasmin's bethrothed, William, is accused of murder, she gathers her wind sprites and rushes to his home town to investigate. She doesn't have a shred of doubt about his innocence. But as she settles in his chocolate shop, she finds more in store than she bargained for. Facing suspicious townsfolk, gossiping neighbors, and William's own family, who all resent her kind - the sorcerer folk from the North -- she must also learn to tell friend from foe, and fast. For the real killer is still on the loose - and he is intent on ruining William's family at all cost.

Part fairytale, part fantasy and magic, part pirate adventure and romance.Oh-- and a large percentage mystery.This is a family saga. At first we think it is about William discovering his mate. For many in his land mates are paired at a very young age. For William, it took longer and someone extra special.Tasmin's people don't want her matched to someone from the barbaric and supposedly nonmagical South. Her mother goes to great strides to arrange an alternative to marriage for her. Unexpectedly, William writes letters to Tasmin beginning at age seven. She doesn't fool herself that she falls in love with him through his letters but a connection is formed. This tale is told in alternating viewpoints between their correspondence and their present difficulties. Along with learning about the intended couple we continually learn not to trust what we think we know. The main crisis occurs when William is arrested for murder. Or is it?Perhaps the real crisis happened earlier. That is all part of the mystery.Even when you think you understand and have all figured out, another tiny bit of information surfaces. Tangled up tighter than a kitten's favorite yarn ball. The bonus material is fascinating and enjoyable. The wind sprites add levity. The Chocolatier's Ghost: Married to her soul mate, the chocolatier William, Tasmin should not have to worry about anything at all. But when her happily ever after is interrupted by the disappearance of the town’s wise woman, she rushes in to investigate. Faced with dangers, dead bodies, and more mysterious disappearances, Tasmin and William must act fast to save their town and themselves – especially when Tasmin starts to be haunted by a most unwelcome ghost from her past…literally.

This book is darker and more tangled than the previous book in this series.William and Tasmin are well on their way to happily ever after and making a success of their chocolate shop. Bonny is imprisoned and Andrew has taken off.Ghosts, spirits and misplaced souls populate the air and evil gathers on the wind.Another mystery is afoot. Once again, author Cindy Lynn Speer creates an amazing world full of magic and murder.You must suspend your disbelief and immerse yourself totally in the tale.Enjoy the telling along with a delicious cup of hot chocolate.

Murder. Funny, how the idea of one’s future husband killing someone made headaches go away. It was not that she could not conceive that he was a killer; anyone who read the shipping information at the back of the newspaper, listing, among other things, the manifests of pirate ships that had been taken and destroyed, would know William was quite capable of killing. But, she reasoned, that was hot blooded killing, it was not murder. Poisoning someone with chocolate required coldness and cunning.

She moved at last, only enough to take her hair down. She stared at the pins in her hands. No. She could not believe that William was capable of cunning. He was smart, aye. But practical smart. Not without imagination, of course, you could not accuse a man who wanted to make chocolates of a lack of imagination, but he was also not the sort of man to go around blithely killing people with the very product he hoped to sell. She could not believe it.

After a while, the surprise wearing off, she tried to imagine the two paths her life might take. She thought of being at the university. She had trained there, and so she had friends as well as colleagues among the staff. Eventually she would have the seniority to teach only the advanced students, perhaps even ascend to the Circle, as her mother hoped. A life of teaching and learning how to use herbs, divining the secret meanings hidden in the wind, the rain, and the veins of leaves was hers. She was no master wizard, but she was very, very good, and she knew her life was mapped out for her here, a scholarly life of respect and decent wages and wanting for nothing. It was, clearly, a good life, which was why her family wanted it for her.

Then there was William. She tried to imagine him, blurry in her mind, by her side. A life of children, shop-keeping. It did not seem as glamorous or interesting, though she trusted she would be able to continue her studies and believed that William would provide for her, but her fame would be as his wife alone. No one would remember her save their children.  Still, it was not without its appeal, the idea of having someone who was all yours, someone to curl up against in the winter. It was harder to imagine the future, here, for she knew so little in comparison. The unknown could hold pain as well as joy.

She sighed, and went to bed, in a restless attempt at sleep for what remained of the night.

When she came down the next day she had two cases in her hands, and she was wearing her best traveling clothes. Her family looked up at her from their breakfast, as she put the heavier of the two down, her hands switching the other bag back and forth, nervous and moist on the hard, wooden handle. “You see,” she said by way of good-morning-and-here’s-my-explanation, “the problem is that I rather like him.”

What would we find under your bed?
Now that summer is finally here, bed bags full of my electric blanket and my cold weather sheets.  Also, my winter boots will be joining them.  Maybe, somewhere way in the back is a retired monster living out his retirement since I am grown up and I’ve not replaced myself with a child of my own, but who knows?
What was the scariest moment of your life?
When I was in Junior High, I was told by the bus driver that she could not take me home due to a house fire.  I asked her to drop me off as close as she could, and I remember the bus ride (I was the last stop) being really long.  After she dropped me off, I walked two miles, down country roads, wondering if my parents were OK, what about the animals, what would we do if the house was gone?  And when I got there I found out it was the neighbor who lives about a half mile away, and the mixture of relief, guilt over the relief, and sorrow for them lingers to this day.
Do you listen to music while writing? If so what?
I don’t listen to anything with words, because words distract me.  On rare occasions I might listen to instrumental music, maybe even something with the right feel on repeat, but that’s rare.
What is something you'd like to accomplish in your writing career next year?
I believe in little steps.  I don’t think I will be lucky in that something huge will happen and make me an overnight sensation, but I do believe, and hope, with steady work and a book every year (next year’s is already turned in!) that every year I will have more sales, every year I’ll have more readers, every year I will get closer to my dream of world domination and tea being served to me by beautiful Scottish men.  I mean, closer to my dream of being able to make my living writing.  World domination, where did that come from?
How long did it take you to write this book?


This one took me ages and ages because – I knew, always, what I wanted to do next with Tasmin and William.  I have a lot of ideas.  But this was the sequel to the book I felt people loved best, that was my best work.  The fear of failing to live up to the Chocolatier’s Wife was weirdly crippling.  I’d fool with it, then give up, write something else, then fool with it some more.  It was much harder to write than its predecessor…but, in the end, very worth it. 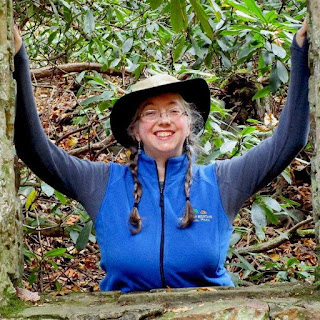 Cindy Lynn Speer has been writing since she was 13.  She has Blue Moon and Unbalanced published by Zumaya.  Her other works, including The Chocolatier’s Wife (recently out in an illustrated hardcover to celebrate its 10th anniversary) and the Chocolatier’s Ghost, as well as the short story anthology Wishes and Sorrows.  When she is not writing she is either practicing historical swordsmanship, sewing, or pretending she can garden.  She also loves road trips and seeing nature.  Her secret side hobby is to write really boring bios about herself.  You can find out more about her at www.cindylynnspeer.com, or look for her on Facebook (Cindy Lynn Speer) and Twitter (cindylynnspeer).