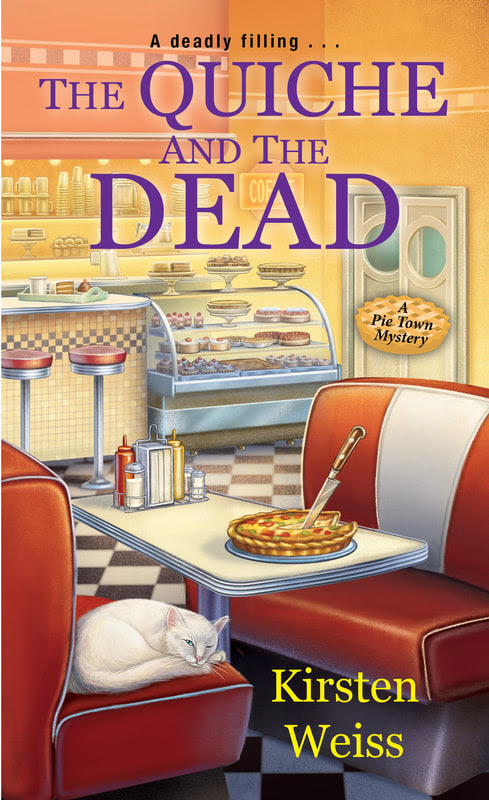 The Quiche and the Dead
A Pie Town Mystery Book 1
by Kirsten Weiss
Genre: Cozy Mystery

Is Val's breakfast pie the quiche of death?

Owning her own business seemed like pie in the sky to Valentine Harris when she moved to the coastal California town of San Nicholas, expecting to start a new life with her fiancé. Five months—and a broken engagement—later, at least her dream of opening a pie shop has become a reality. But when one of her regulars keels over at the counter while eating a quiche, Val feels like she's living a nightmare.


After the police determine the customer was poisoned, business at Pie Town drops faster than a fallen crust. Convinced they’re both suspects, Val's flaky, seventy-something pie crust maker Charlene drags her boss into some amateur sleuthing. At first Val dismisses Charlene’s half-baked hypotheses, but before long the ladies uncover some shady dealings hidden in fog-bound San Nicholas. Now Val must expose the truth—before a crummy killer tries to shut her pie hole. 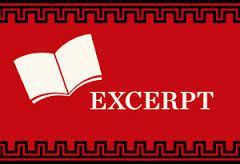 A blond in a smooth-fitting, green workout suit strode through the dining area. Her ponytail bobbed, her long,
lean dancer’s muscles moving smoothly, and I had to crane my neck to look up at her. On her jacket, Heidi’s Health
and Fitness was emblazoned over her heart. She halted in front of the register.
Joe looked up from his bar stool, grinning, but his smile seemed a little pained.
“Hi.” Smiling, I laid a hand on the counter. “You must be from the new gym. I’m Val.”
“I’m looking for the owner.” The corners of her lips quirked, quick, professional, cool.
“That would be me. Welcome to the street. I was about to go to your grand opening.”
“I’m Heidi Gladstone.”
We shook hands, my knuckles grinding within her grip.
Dropping my hand to my side, I flexed my fingers, restoring the circulation. “Thanks for stopping by. I baked a
welcome gift for your grand opening,” I said, taking the quiche from beneath the counter.
“No thanks.” She shook her head. “I don’t do dairy.”
“I used almond milk.”
“Is there any cheese in it?”
“Only goat cheese.”
She reared away as if I’d suggested cyanide. “I don’t do dairy.”
Joe’s smile broadened.
I took a deep breath, inhaling the calming scents of baking fruits and sugar. “What can I do for you?”
“You can change your sign.” She pointed at the neon above me. “Turn your frown upside down? It encourages
emotional eating. Sugar kills, and though it does give a quick emotional high, the satisfaction is fleeting. My
customers are trying to rebuild their health. It’s not good for them to constantly see that negative reinforcement.”
I laughed. She was kidding. Of course. “Right. Good one!”
She frowned, a faint line appearing between her blond brows. “I’m quite serious.”
“But . . . it’s my slogan. It’s on everything—my sign outside, the menus, my business cards.” This had to be
a joke.
“Exactly,” she said. “It’s a problem. Do you have any sugar-free pies?”
“My potpies are sugar free. And so is this quiche.”
“I advocate a vegan diet. I couldn’t eat a potpie or a quiche. Do you sell any sugar-free fruit pies?”
“Um, no.” Sugar free? I’d heard of such things, and this was California, where people could be more thoughtful
about eating. But a sugar-free pie? That was unnatural and possibly un-American. Besides, fruit was full of natural
sugars.
“I’ll bring some recipes by tomorrow.” She whirled, her ponytail coming within inches of my face, and marched out
of the store. The bell over the entrance tinkled in her wake.
Joe wedged himself free of the bar stool and waddled to the counter, arms extended. “I’ll take that breakfast pie.
And a fork.”
Sighing, I handed him the quiche. “All right. You win.
Do you want a plate to go with that?”
“No. Why get a plate dirty? I’ll eat it from the tin.”
“How did you know she wouldn’t take it?”
Joe winked. “She kicked off her grand opening this morning with a lecture on the evils of gluten, lactose, and
anything that tastes good. I figured at least one of those things would be in that breakfast pie.”
I nodded. I had yet to meet a gluten-free piecrust that really sang.
He rubbed his stomach. “And the spread was awful, all twigs and health food.”
“It is a gym.”
Petronella stomped toward me in her black motorcycle boots, her brows lowered in a slash, a pie in each hand.
“Are you working the counter today or am I?”
“You are. Sorry. You can have it back.” I edged away.
“Because I need this job, and if you’ve decided you can do it for me—”
“Nope, you’re still chief pie wrangler. Have at it.” While I wasn’t exactly afraid of Petronella, both she and Charlene
were protective of their duties. And since Charlene made the best piecrust in five counties, and Petronella could
soothe the most ferocious customer, I’d learned to stay out of their way.
There was a choking sound, and we both snapped our heads toward the counter.
Joe’s fork clattered to the linoleum. Bowed over the quiche, he gripped his stomach.
I froze, brows squishing together, coldness piercing my core. Then Petronella and I raced around the counter,
bumping into each other as we fought our way through the narrow passage beside the cash register.
Joe fell to the floor, writhing.
I fumbled in my apron pocket for my phone and called 9-1-1.
Petronella clasped one of Joe’s hands. “Joe! I’m here.
Val’s calling an ambulance. What’s happening?”


Joe went limp, his eyes rolling back. He didn’t answer.

Nothing says starting a new life like having one of your regular customers expire while gobbling down a specially made breakfast pie - especially when you own a pie shop!Valentine Harris expected to start a new life by sinking all her money and time into a new business and sharing her adventures with the man of her dreams. Well, the man turned out to be a nightmare, the wedding dress that was never used, is a constant reminder, and as stated above, the pie shop isn't exactly a gourmet success. In fact, since she can't afford to hire enough staff, much of the business is self serve and pay on the honor system!The bright spot, or the glowing spotlight central to this new adventure, is an aged crust maker (she claims to be over forty but could be as much as ninety!) who just happened to be an ex-lover of the dearly departed. And super hyped up on adrenaline and conspiracy theories. Charlene is a hoot!She takes quirky to a whole new level but adds to much to the series.Add in a healthy business neighbor you'll love to hate from the get-go and hang on for a non stop ride well over any acceptable speed limit. While Val worries about her business surviving, I worried if Val would make it to the next book! Secrets abound, although which are real and which are in Charlene's head?I was so glad to have the next book to read as soon as I finished this first one. 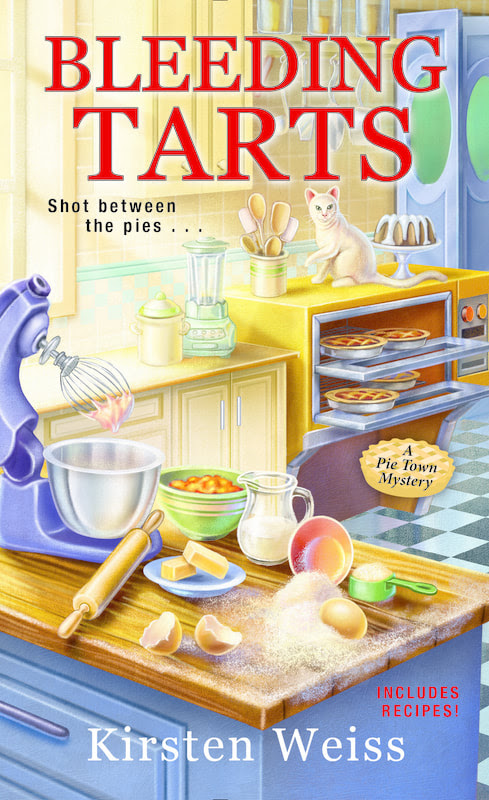 Old West ghost towns are as American as apple pie. So what better place to sponsor a pie-eating contest than the Bar X, a fake ghost town available for exclusive private events on the edge of Silicon Valley. Valentine Harris is providing the pies, hoping to boost business for her struggling Pie Town shop and become a regular supplier for the Bar X.


But no sooner does she arrive in town than a stray bullet explodes the cherry pie in her hands. And the delicious dessert is not the only victim. Val finds the Bar X bartender shot dead in an alley. Egged on by her flaky friend and pie crust specialist, Charlene, Val aims to draw out the shooter. But solving a real murder in a fake ghost town won't be easy as pie. And if Val doesn't watch her back, her pies won't be the only thing filled full of lead . . .

I read this immediately following the first book in the series. The quirky, madcap adventure continues at the same super quick pace. Val is grateful her business survived a tragic beginning, and now she even has a place to live, which doesn't require her to shower at her gym.
Somehow she got talked into doing investigations with her conspiracy theory driven pie crust maker, Charlene. Although Val is really just trying to humor her new friend, coworker and landlady.
She truly is excited to have an opportunity to expand her pie shop's reputation by supplying pies to a ghost town tourist attraction - the Bar X bar.
There is even a chance Val could finally move forward with her social life and have an actual date!
Except that "circumstances" not only keep her potential male friend from having time, when Val is again a person-of-interest in a murder, it wouldn't work for this law man to get involved with her socially.

Is the ghost town haunted? Are fairies playing tricks? Is Charlene's old nemesis a murderer?
The mystery this time is more convoluted than the first book, but equally as dangerous to Val and pals. They will need pie to help them think through the clues.

Fortunately for us, delicious sounding recipes are included at the books end.

I can't wait for this series to continue! Loads of fun! 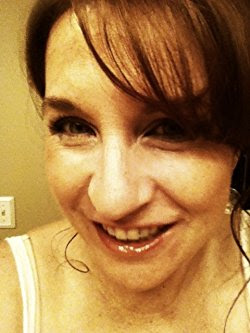 Kirsten Weiss worked overseas for nearly fourteen years, in the fringes of the former USSR and in South-east Asia. Her experiences abroad sparked an interest in the effects of mysticism and mythology, and how both are woven into our daily lives.


Now based in San Mateo, CA, she writes genre-blending steampunk suspense, urban fantasy, and mystery, blending her experiences and imagination to create a vivid world of magic and mayhem.

Kirsten has never met a dessert she didn’t like, and her guilty pleasures are watching Ghost Whisperer re-runs and drinking red wine.