A Recipe for Disaster by Belinda Missen

A Recipe for Disaster 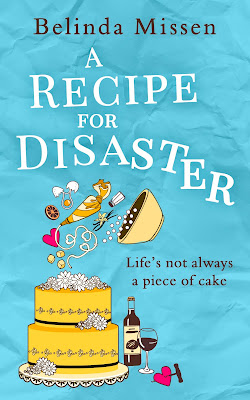 Lucy is quietly confident that she has made the right choices in life. Surrounded by friends and family in a small country town, Lucy can easily suppress the feeling that something is missing from her life.
But when a blast from the past arrives in the form of her estranged husband, international celebrity chef Oliver Murray, Lucy’s carefully constructed life begins to crumble beneath her like overbaked meringue.
Is Oliver’s return all business or is it motivated by something more?
A Recipe for Disaster starts long after most love stories would have ended, proving it is never too late to offer someone a second slice of cake or a second chance.

For Lucy and Oliver, friendship came first, followed by romance and what appeared to be a good marriage and shared reams. Until opportunity arose, Oliver became a celebrity in his field and moved away from home. Leaving Lucy behind, and as with many celebrities, not mentioning the existence of a wife. All of this happens before the book begins.This story starts when Oliver returns, continuing to pursue HIS dreams as well as some of their shared dreams. He just isn't as upfront and communicative as he should be about it. He means well, but he doesn't go about it the best way. What he also wants is to get their marriage back on track.Lucy has been getting by, but she still has dreams. Does she want Oliver back? Can they work together towards old dreams? Only time will tell.All around her, people she cares about are also going through crises of marriage. Her parents, who are very different from each other seem to have made life and marriage work, but others, who seemed to be headed in the right direction, are now floundering. How can one tell what will work or when to call it quits?

Belinda Missen is an award-winning and best-selling author, screenwriter, and freelance writer from Geelong, Australia.

A reader from an early age, Belinda began writing her own stories shortly after her love affair with Steven Spielberg’s film Jurassic Park began.
What began as fan-fiction soon took deeper root, and she was scribbling out strange little stories in empty notebooks she found laying around the house.

With qualifications in transport and office administration, and a combined career of fifteen years in these industries, Belinda decided to uproot everything in 2013 and return to her first love of writing. She now writes full-time, between cups of coffee, binge watching television, and feeding her cats and husband.

In April 2016, she was awarded the JOLT Courthouse Youth Arts Award in the Inspire 26+ Category for her piece Obsession.

In February 2017, her book Love And Other Midnight Theories clawed its way to the top of the Amazon charts in its category of Performing Arts, beating JK Rowling’s Fantastic Beasts and Where to Find Them. True story – she has the screenshots to prove it.

When not dabbling in the written word, Belinda can be found mentoring other writers, beta-reading, reviewing, helping others to ready books for publication, and sleeping. In the digital world, she can be found online at Goodreads, Facebook, Twitter, Instagram, and Pinterest