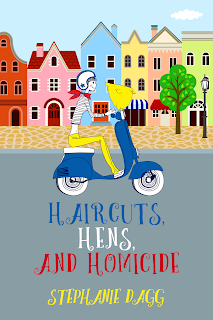 Megan finds mayhem when she arrives in France to bury her Gran and sort out her affairs. She expected difficult encounters with civil servants and red tape but not with wandering chickens, an imperious policeman and a dead body. Together with her unlikely new friend, the elderly and grumpy Alphonse and his canine equivalent, Monsieur Moustache, Megan becomes involved in investigating the fowl-related foul play that’s at work in this sleepy part of rural France.
She’s helped but mainly hindered by the people she comes across. These include the local mayor, who wants Megan to stay and set up a hair salon in his village to help keep it alive. There are the cousins Romain, the gendarme, and Nico, the clumsy but hunky farmer. They have always clashed, but do so constantly now that Megan is on the scene. Michelle, Romain’s terrifying ex who wants him back, appears along the way, as does Claudette, a wheelchair-bound old lady, and Kayla, Megan’s best friend, who is hugely pregnant but not above taking on the forces of French law and order when Megan finds herself the prime suspect after Alphonse is stabbed.

There’s excitement, humour and lots of ruffled feathers in this rom-com slash cosy mystery, the first in a projected series.

Whenever I sat down to enjoy another visit to France via this book I made myself comfortable because I didn't want to put it down. I didn't want it to end, so I took my time.I laughed my way through Megan's adventures. Yes, losing a grandparent is sad, especially one who raised you. Having to leave when your closest friend is about to give birth is sad, but Stephanie Dagg made us laugh through it!Being the next victim of a psychopath is scary! and still, we are able to laugh and look forward to reading more.Fast paced and funny - I loved this and am happy there will be more.Oh- I also loved the alternate title this could have been called. 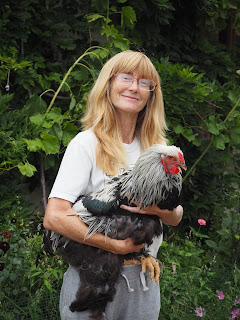 Author Bio –
I'm an English expat living in France, having moved here with my family in 2006 after fourteen years as an expat in Ireland. I now consider myself a European rather than 'belonging' to any particular country. The last ten years have been interesting, to put it mildly. Taking on seventy-five acres with three lakes, two hovels and one cathedral-sized barn, not to mention an ever increasing menagerie, makes for exciting times. The current array of animals includes alpacas, llamas, huarizos (alpaca-llama crossbreds, unintended in our case and all of them thanks to one very determined alpaca male), sheep, goats, pigs, ducks, geese, chickens and turkeys, not forgetting our pets of dogs, cats, zebra finches, budgies , canaries, lovebirds and Chinese quail. Before we came to France all we had was a dog and two chickens, so it's been a steep learning curve. I recount these experiences in my book Heads Above Water: Staying Afloat in France and the sequel to that, Total Immersion: Ten Years in France. I also blog regularly at www.bloginfrance.com.
I'm married to Chris and we have three bilingual TCKs (third culture kids) who are resilient and resourceful and generally wonderful.
I'm a traditionally-published author of many children's books, and am now self-publishing too. I have worked part-time as a freelance editor for thirty years after starting out as a desk editor for Hodder & Stoughton. Find me at www.editing.zone. The rest of the time I'm running carp fishing lakes with Chris and inevitably cleaning up some or other animal's poop.