Visions of Zarua
Two wizards, 350 years apart.
Can they save the realm of Paltria from Zarua's dark past? 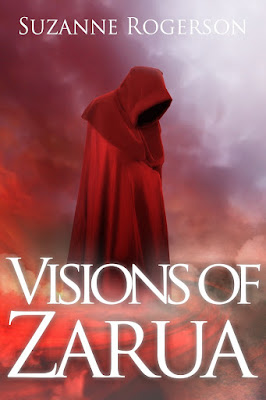 
An ancient darkness haunts the realm of Paltria.
Apprentice wizard Paddren is plagued by visions of a city on the brink of annihilation. When his master dies in mysterious circumstances, the Royal Order of Wizards refuses to investigate.
Helped by his childhood friend, the skilled tracker Varnia, and her lover Leyoch, Paddren vows to find the killer.
The investigation leads Paddren down a sinister path of assassins, secret sects and creatures conjured by blood magic. But he is guided by a connection with a wizard from centuries ago - a wizard whose history holds the key to the horror at the heart of the abandoned city of Zarua. Can Paddren decipher his visions in time to save the Paltrian people from the dark menace of Zarua’s past?

Universal Purchase Link - Universal book link
Visions of Zarua is only 99p for a limited time to celebrate the book birthday.

This scene is really special to me as it’s where Varnia first appeared as a character. She’s a lone huntress tracking what appears to be a rabid wolf. It came too close to town, killed some sheep and maimed the shepherd. As the hunt mistress it’s her job to track and kill the rabid beast and she goes alone while the cowardly townsfolk demand she brings back its head as proof...

The trail ended abruptly. Varnia’s heart thundered in her chest as she searched the empty landscape for sign of her quarry. Sweat gathered on her skin despite the cool dawn breeze and her bow slipped in her grasp. The wolf had disappeared.
Its huge paw-prints lay clearly behind her but disappeared mid-step. The hounds sniffed at the ground and whined. Varnia patted them to silence before commanding them to continue searching out the scent.
The sun was just rising. Varnia scanned the surroundings; there were no streams to camouflage its tracks and the only trees were at least thirty yards away.
Varnia knelt to study where the tracks disappeared. Beneath her fingertips, the ground hummed and her magic tingled in response. She pulled away and took a few deep breaths to clear her head of the taint.
The hounds began to bark, the familiar signal that indicated they’d found their prey.
Notching an arrow into position, Varnia joined Blaze and Flint in the trees. The hounds stood alongside a carcass, wagging their tails as they waited for her approval.
Varnia stared down at the pile of fur lying on a soft bed of fallen blossom. Only as she examined the body more closely could she recognise it as a wolf. She gave the beast a cautious prod with the tip of her boot, even though there was no chance of it being a threat. The skin dented under the pressure - the corpse was fresh.
She slung her bow across her back and touched the wolf with a trembling hand, surprised to find the flesh still warm and malleable. Its fur was sleek and healthy, no sign of mange or disease. The beast had been fit and healthy a short time ago, now it looked as though its skeleton had been shattered from within, reducing the once magnificent wolf to a sack of broken bones.
Varnia noticed something hooked around a claw in the right forepaw. She picked up the huge padded foot to examine it and realised it was a piece of bloody fabric. Varnia removed the material and stored it in her pack, certain it had come from the shepherd’s clothing. It wasn’t quite the proof old Mikkney had demanded, but she couldn’t take him the slain creature’s skull. She had no explanation for the manner of its death; no weapon could crush a skull from the inside and leave the skin intact. Varnia knew a wizard had killed the wolf. She was almost tempted to use her powers to see what had happened, but she’d promised herself never to give in to the urge. That part of her was dead.
Covering the pathetic-looking creature with a screen of old branches and twigs, Varnia hiked back to town empty-handed. 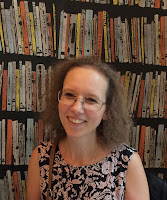 Suzanne lives in Middlesex, England with her hugely encouraging husband and two children.


She wrote her first novel at the age of twelve. She discovered the fantasy genre in her late teens and has never looked back. Giving up work to raise a family gave her the impetus to take her attempts at novel writing beyond the first draft, and she is lucky enough to have a husband who supports her dream - even if he does occasionally hint that she might think about getting a proper job one day.
Suzanne loves gardening and has a Hebe (shrub) fetish. She enjoys cooking with ingredients from the garden, and regularly feeds unsuspecting guests vegetable-based cakes.
She collects books, loves going for walks and picnics with the children and sharing with them her love of nature and photography.
Suzanne is interested in history and enjoys wandering around castles. But most of all she likes to escape with a great film, or soak in a hot bubble bath with an ice cream and a book.