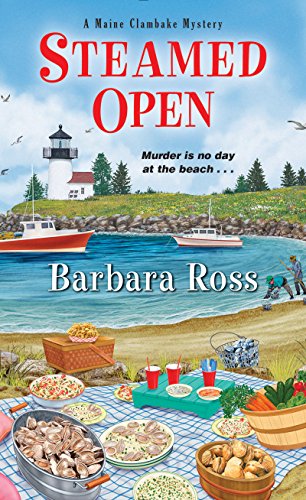 It’s summertime in Busman’s Harbor, Maine, and the clamming is easy—or it was until a mysterious new neighbor blocks access to the beach, cutting off the Snowden Family Clambake’s supply. Julia Snowden is just one of many townspeople angered by Bartholomew Frick’s decision. But which one of them was angry enough to kill?
Beachcombers, lighthouse buffs, and clammers are outraged after Frick puts up a gate in front of his newly inherited mansion. When Julia urges him to reconsider, she’s the last to see him alive—except the person who stabs him in the neck with a clam rake. As she pores through a long list of suspects, Julia meets disgruntled employees, rival heirs, and a pair of tourists determined to visit every lighthouse in America. They all have secrets, and Julia will have to work fast to expose the guilty party—or see this season’s clam harvest dry up for good.

Steamed Open is a complicated mystery flavored with layers of history and complex family relationships. You can read this as a stand alone novel, but will find yourself wanting to know more about the main family, the quirky year round residents, and the fire that destroyed Windsholme, the mansion on Morrow Island. Dive in, knowing you will surface satisfied.
While there may be stories of ghosts circulating around lighthouses, someone very real and very angry murdered the mysterious heir to Herrickson House. Bart Frick had not been in the community long before he many many enemies. The search for his killer and for a new heir to this magnificent, yet odd, property will reveal deep secrets. Another secret, one very close and personal to our heroine, Julia, is also tangled up in the plot. She has been very patient with her live in boyfriend, but now his behavior borders on creepy. Can she save this relationship? Will her question asking put her own life in danger?
If this is the first book you have read in this series, or the seventh, you will not be disappointed or walk away hungry. 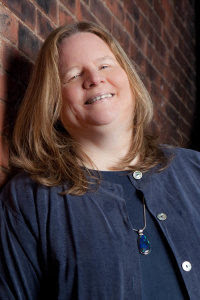 Barbara Ross is the author of the Maine Clambake Mysteries

.
The first book in the series, Clammed Up was nominated for an Agatha Award for Best Contemporary Novel, the RT Book Reviews, Reviewer’s Choice Best Book Award for Amateur Sleuth and was a finalist for the Maine Literary Award for Crime Fiction.
She is co-editor/co-publisher of Level Best Books, which produces anthologies of crime stories by New England authors. She writes at her home overlooking the harbor in Boothbay Harbor, Maine.
Barbara blogs with the Wicked Cozy Authors and Maine Crime Writers.
Readers can visit her website at MaineClambakeMysteries.com.