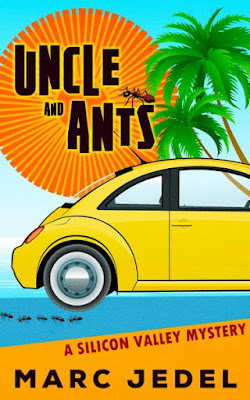 Mysterious attacks. Mischievous nieces. Can a clueless uncle catch a tech-savvy killer … and be home before bedtime?
When a freak accident hospitalizes Marty Golden’s sister and condemns him to babysitter duty, he thinks it’s just another case of hardwired bad luck in Silicon Valley. Until a suspicious murder suggests the mishap was no mere coincidence. Something must be done.
Too bad this quirky, fashion-backward uncle isn’t exactly hero material.
Convinced his sister is in mortal danger, this amateur sleuth follows clues to an oddball array of suspects. Armed with nothing but an eye for detail and powers of self-delusion, Marty tangles with gangsters, a cantankerous school secretary, and a perplexing woman he can’t help but fall for. Glitches in his investigation seem like a piece of cake compared to dinner-prep and bedtime stories with his two precocious, pre-teen nieces.
Can Marty catch the culprit, save his sister, and get his life back in order before he gets unplugged?
Uncle and Ants is the first novel in a refreshingly modern mystery series set in Silicon Valley. If you like clever humor, sassy side characters, and average Joes facing extraordinary circumstances, then you’ll love this twisty mystery.
Buy Uncle and Ants to login to a fresh, funny mystery today!

While this is not deep literature or the most confounding of mysteries, it was just plain fun to read. The future is now!
Self driving cars, that may not stay where you leave them, and flying drones, used for various purposes, and kids. Well, kids will always be kids and unpredictable.

When Uncle Marty becomes a "parent" while his sister recuperates, he finds himself drawn into the mystery of why she was involved in an accident and who may have cause it on purpose.
When there is a mix up at the hospital and a death follows, Marty has to stay on his toes and not slip into delusions of paranoia.

With subplots and suspects and plot twists aplenty, this book will take you down a road less traveled.
What could possibly happen next? 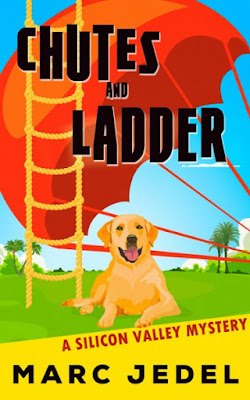 Can super-agent (in his own mind) Uncle Marty solve not one, but two mysteries without becoming a victim himself? Will he ever be forgiven for bringing Buddy, the Labrador, into his sister’s house?
All your favorite characters from Uncle and Ants are back in a crazy, new adventure. Plus, introducing a new member of Marty’s family!

Q. What got you interested in writing?
Like most authors, I’ve always loved to read. As a child, I had a special notebook for my stories. When I was young, I even got in trouble for my writing. I carved my name into a wood side-table. I tried to pin the blame on my sister, who clearly had tried to get me in trouble AGAIN. This felt like a winning argument until my mother pointed out that my sister couldn’t write yet.

Q. What genres do you write in?
My first book, Uncle and Ants, is a cozy mystery. My second book, Chutes and Ladder (coming soon), is also a cozy. By process of elimination, I’ve concluded I’m a cozy mystery writer.

Q. What drew you to writing in these specific genres?
On a vacation, I picked up my wife’s copy of a Janet Evanovich novel. She got mad when I didn’t return it until I’d finished. My wife that is, not Janet. Janet would be happy that  I’ve purchased a number of her other books and even consulted her How I Write book when I started writing.

Q. How did you break into the field?
I feel like my entire professional life in marketing has been about writing fiction. We just called them ads and emails. After wanting to write a book for many years, I finally focused on it. Lots of work, walks with the wife and dog, and drafts have led me to having my first novel published.

Q. What do you want readers to take away from reading your works?
I want them to laugh and enjoy spending time with my characters. There may be some deep, meaningful themes incorporated in my stories, but they got there by accident. It’s a fun, light story about a good guy, who thinks he wants his sister safe and his firecracker, eye-rolling nieces out of his apartment so he can get back to normal. He doesn’t realize it, but he really wants more out of life — more ties to family, more friends, and perhaps a new relationship.

Q. What do you find most rewarding about writing?
Hearing crazy stories from readers about their own dogs, cats, dads, uncles, siblings, etc. I love that readers find something in my stories that makes them laugh, or remember something, and then share that with me.

Q. Is there anything else besides writing you think people would find interesting about you?
I like to think I’m endlessly fascinating. However, normal people might enjoy learning that the ice cream truck story that finishes chapter two is completely true. The rest is only loosely based on reality except where I’ve exaggerated, made it up or falsified memories to fit the story.

Q. Any last comments?
Now’s a great time to read Uncle and Ants (available on Amazon and free via Kindle Unlimited) because Chutes and Ladder, book 2 in the Silicon Valley Mystery series, will be released soon. Read the first chapter of either book free, learn more about the author or books, and find out about special offers at www.marcjedel.com. 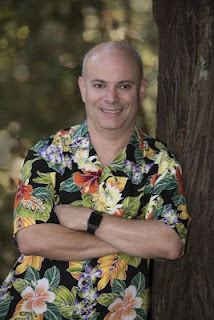 In his family, Marc was born first — a fact his sister never lets him forget, no matter what milestone age she hits. For most of Marc’s life, he’s been inventing stories. Some, especially when he was young, involved his sister as the villain. As his sister’s brother for her entire life, he feels highly qualified to tell tales of the evolving, quirky sibling relationship in the Silicon Valley Mystery series.

Family and friends would tell you that the protagonist in his stories, Marty Golden, isn't much of a stretch of the imagination for Marc, but he proudly resembles that remark.

Like Marty, Marc lives in San Jose, the heart of Silicon Valley, where he writes within earshot of the doppler effect of the local ice cream truck. Unlike Marty, Marc has a wonderful wife and a neurotic but sweet, small dog, who much prefers the walks resulting from writer’s block than his writing.

Visit his website, marcjedel.com, for free chapters of upcoming novels, news and more.

EXCERPT
In the lobby, I found a quiet corner to call Sergeant Jackson.
If this wasn’t all just a crazy series of mishaps, then I had no idea who might have tried to kill Laney. It could have been someone good with technology, like me, who tried to get the drone to crash into her. Maybe they’d heard she survived the crash on the news, instead of getting a call from the nurse, like me. They could have learned what hospital room Laney was in by checking the directory … just like I did.
I put the pieces together. Either I had tried to kill her, this was all a crazy coincidence, or someone else was trying to murder Laney. I knew I hadn’t done it so that left a valley full of other techies. Or, my imagination was overheating again.
Sergeant Jackson’s voicemail answered on the first ring. I hadn’t prepared a crisp summary of the situation. Instead, I left a lengthy, and likely confusing, message for him.
Perhaps in another lapse in the childhood etiquette lessons from my mother, I’d never practiced crafting a voicemail message to a police officer that someone might have tried to kill my thirty-seven-year-old sister with a rogue drone and then had accidentally killed a terminally ill, elderly Vietnamese woman in a room with my sister’s name on the door. Or that the elderly woman, who wasn’t my sister, had a really loud and close family in a city outside of the officer’s jurisdiction, and was in the process of distracting those police officers from investigating the possible attempted murder of my sister.
Well, maybe crazy people practiced things like that in their head. Too many people already thought I was wacky. I didn’t want anyone thinking I was paranoid. But as they said, just because you were paranoid didn’t mean they weren’t after you.


Or your sister.BlogThis!Share to TwitterShare to FacebookShare to Pinterest