A Twist of Oleander 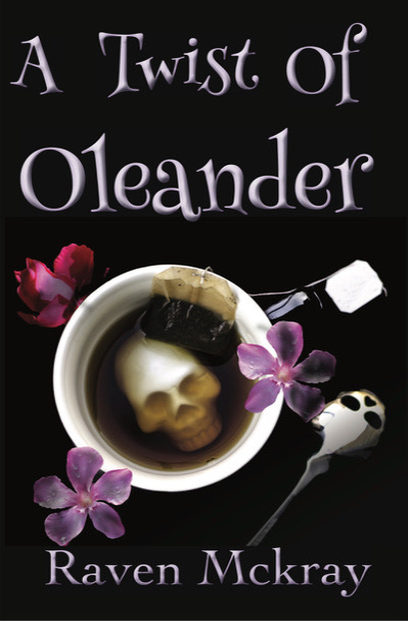 An escape from madness leads to murder …

After suffering a manic episode, twenty-six-year old Maddie Malone retreats to small-town Kenowa and her aunt and uncle’s cattle ranch for peace and restoration. But things are never quiet for long in Maddie’s world: She finds her heart torn between her childhood sweetheart and a suave older man. Then tragedy strikes: Maddie’s uncle is found dead; poisoned by a cup of oleander tea. The police think its suicide. Maddie knows its murder. Now it’s up to her to prove it.

PRAISE:
“This is a well-plotted cozy mystery, and you do a great job casting plausible suspicion on all of the main characters so that the big reveal during the climax is satisfyingly unexpected and exciting.”–Kindle Scout Editorial Review 2018


ORDER YOUR COPY AT —> AMAZON 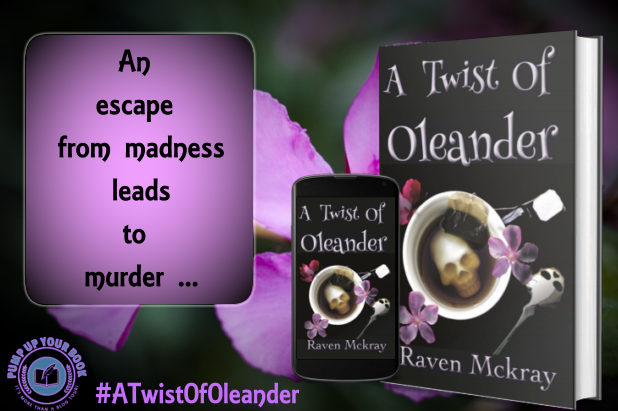 The buzzing had stopped, but my thoughts were thick like oil, and my legs and arms had turned to lead. I opened my eyes to the too-bright world and took a breath.
“Do you know who you are?” asked a female voice next to me. It took all my energy to turn my head to look at her. In the chair beside the bed sat an Asian woman with kind eyes and shoulder-length black hair. Her voice soothed and strengthened me. She had a clipboard and was writing things on it.
I nodded. “I’m Maddie Malone.”
“That’s right. I’m Dr. Ng. Do you know where you are now, Ms. Malone?” She stopped writing, her pen poised in the air.
I cringed. “Yes, Carville General Hospital. I… I work here. I’m a nurse.”
Dr. Ng nodded. “Great. Can you tell me what happened back in Emergency? You had to triage the patients, is that correct?”
“Yes. I had a lot of things to do, so many people needing help… I snapped. I couldn’t think anymore. Nothing made sense.”
My mind went back to that terrible moment, back in triage, when I had drifted down the hallway like a sleepwalker, shrouded in dreams. Around me, other people yelled and made gestures. They moved back and forth, carrying trays full of instruments and bits of paper. I walked past them, keeping my head down. The buzzing inside my brain began: izz-izz-izzz.  Fear bit at me like an animal; moving under my skin and burrowing into my stomach.
I remembered all the people in the bright, white room staring at me; their eyes like coals. I was trembling inside. A woman, holding a clipboard, approached me. She spoke, and this time I heard a word I knew—Maddie.  I breathed in relief: I had a name. Then the woman thrust a paper into my face. I could read words like, “clopidogrel bisulfate” and “thrombolytic.” I knew the shape of the words, their sound, but not their meaning. I tried to eat the words, to make them talk, but the bees in my brain were becoming louder than my thoughts: izz-izz-izzz.
Dr. Ng’s soft voice pulled me back to the present: “That's good, Maddie. Go on.” I knew what type of doctor she was, even though I had never set foot in this part of the hospital. Dr. Ng. was a psychiatrist. We were in the psych ward.
“I thought I would lose consciousness,” I said, my voice a bare whisper. “I was sure I was dying… I was dying inside.” I remembered how the fear-animal thrust its quills into me. The lights above me were too bright; they were daggers to my eyes. I covered my face with my shaking hands. What did these people want from me?
Then, I knew. I was the only one who could help. I had to save these people from Death. I had seen Death that morning. Its claws had been around the face of an old woman; her skin lined and thin as paper. I had tried to help her, but Death was too strong. I had heard Death, too, creeping around the children with bald heads. I had tried to help them, but Death had taken them away.
“IZZ-IZZ-IZZZ-ZIT?” the bees asked me. I shook my head, but it was pointless. The bees wouldn’t leave my ears.
Death was coming for me. My breath came harder, faster. My hands and feet tingled. My body vibrated in time with my frenetic heartbeat. I could see Death now, his enormous body draped in shadows. His eyes glowed red from too many tears and from the hell-fires of the damned. He smelled of antiseptic and rotting wounds. His claws were already closing around my heart. I would lose consciousness, and then he would kill me...
“What happened after that?” Dr. Ng prodded.
“I thought I was dying...” I whispered again, trembling, trying in vain to shut out the memory, the moment before the world went black. I remembered how men with white robes came to hold me down, how they stole a quill from Fear and stuck it in my arm.

“They stuck me with needles...” I said in a bare whisper. “Then I woke up here.”
Dr. Ng regarded me thoughtfully, then wrote something in her notes. She asked me a few more questions, and I answered them the best I could. Then she gave me medication and left me to sleep.
I drifted in and out of sleep over the next few days. During times of wakefulness, there were no flowers, no cheerful faces saying, “Get well soon.” For a while I hoped, and feared, that a few of my coworkers might come to visit: Maybe Rita or Susan, who had commiserated with me about management and day-to-day stresses.
I needn’t have worried. No one came. No one wanted to see the woman who had gone crazy. I was alone, and I was in pain. I didn’t quite want to die, but I wanted the pain to stop. It was like someone had implanted magnets in my body, and the magnets were pulling me down, down, down to the core of the earth.
Only my mother stood by me. When I was lucid, she was there, sitting beside me. Her eyes were red and puffy, but she still looked beautiful. She even managed a smile.
“It’ll be okay, Maddie,” she said, patting my hand. I nodded, biting my lower lip. I turned my head away, into the pillow, so she wouldn’t have to see me cry.

Maddie Malone is an emergency room nurse. When she finds herself the patient, rather than the caregiver, she knows it is time for a break. Her mother suggests Maddie take some time to visit her aunt and uncle in the country. Maddie has fond memories of times spent there when she was younger.Tragically, the country does not turn out to be as soothing as all hoped. From a fire upon her arrival, to the death of her beloved uncle shortly after, Maddie is having a difficult time healing and finding her new path. Add to that the offer of a new job, in nursing, and her being drawn into a romantic triangle, and tension stays with Maddie from the first page to the last!While the police seem satisfied to call her uncle's death an accident or, more likely, suicide, one small clue assures Maddie that Uncle John's death was anything but accidental. He had so much he was looking forward to in life. Mixing artistry and science with romance, this book offers a lot to a wide variety of readers. 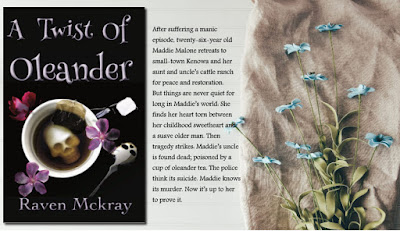 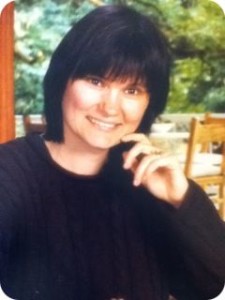 Raven McKray lives in Ontario, Canada. She received her master’s degree in English Literature from Carleton University and has a degree in Education from the University of Ottawa. Her first novel, “Under A Fairy Moon,” written under the pseudonym “T. M. Wallace” won the Gelett Burgess Children’s Book Award (Fantasy) and the Canadian Christian Writer’s Award (Young Adult Fiction) in 2012. “A Twist of Oleander” is her first mystery novel for adults, and the first book in the Maddie Malone Mystery series.