BARK IF ITS MURDER

Bark If It's Murder 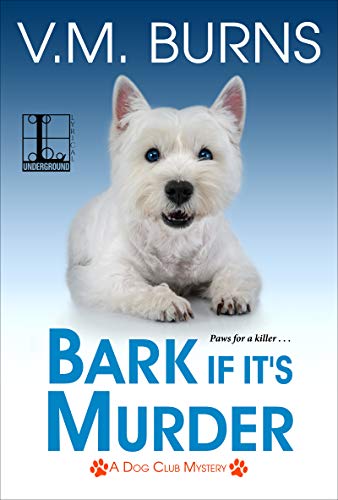 Lilly Echosby just witnessed a murder on a pet cam. Or did she?
When a last-minute opportunity arises to accompany her boss to an art auction in Atlanta, Lilly throws some money at the problem of where to board her toy poodle Aggie (short for Agatha Christie). Posh Pet Haven offers the most luxurious canine accommodations in all of Chattanooga, Tennessee. The place even provides pet cams so anxious owners can check in on their pampered pooches.
But when Lilly tries to take a peek at her poodle, she gets a terrible shock—she witnesses what she’s sure is a murder. She thinks the victim may be the wealthy co-owner of Pet Haven. The police follow her lead but find no body, no evidence of a crime, and no video record. Starting to feel like the dog owner who cried wolf, Lilly decides to go undercover to catch a killer who may be hiding in plain sight …

Lily Echosby is starting over. She moved from New York with its extreme seasons to Chattanooga, TN. She has enough money to live on, thanks to an insurance settlement, but she is an independent woman determined to take care of herself and her family. Right now that family is mainly her dog, Aggie, but she also has two successful in their own rights human children.
She also has a part time job she is very happy with. As part of that job, Lily has the opportunity to attend an art auction, but her pup, Aggie, is not welcome to tag along.
Somewhat hesitantly, Aggie is boarded in a pet resort, with amenities better than most grand hotels, including doggie cameras so owners can check in at any time of day or night. It is during one of these check-ins that Lily witnesses what she believes is a murder. The trouble is, there is no body when the police arrive.
With a nod to great mysteries as well as fond memories of '70s television, Lily must convince the authorities, including her budding new romantic partner, that she saw what she saw. Her son, David, a talented actor, arrives for a visit just in time to help her investigate, along with the many talents of Lily's dog training classmates.
As if that is not stressful enough, Lily and Aggie are in search of a place to live, to call home. When everything seems to be falling into place on that front, a case of identity theft raises a red flag.
This can be read as a stand alone and enjoyed. If you are a fan of dog loving cozy mystery characters, you will want to read this entire fascinating and entertaining series. You may even get some valuable dog training tips as you read. The only thing that could have made this better would have been a recipe for dog treats!

V.M. Burns was born in Northwestern Indiana and spent many years in Southwestern Michigan on the Lake Michigan shoreline. She is a lover of dogs, British historic cozies, and scones with clotted cream. After many years in the Midwest, she went in search of milder winters and currently lives in Eastern Tennessee with her poodles. Her debut novel, The Plot is Murder was nominated for a 2017 Agatha Award for Best First Novel. Valerie is a member of Mystery Writers of America, International Thriller Writers, and a lifetime member of Sisters in Crime. Readers can learn more by visiting her website at vmburns.com

Have you signed up to be a Tour Host? Click Here Find Details and Sign Up Today!
Posted by Laura S Reading at 12:01 AM