MURDER DOUBLE OR NOTHING

Murder Double or Nothing 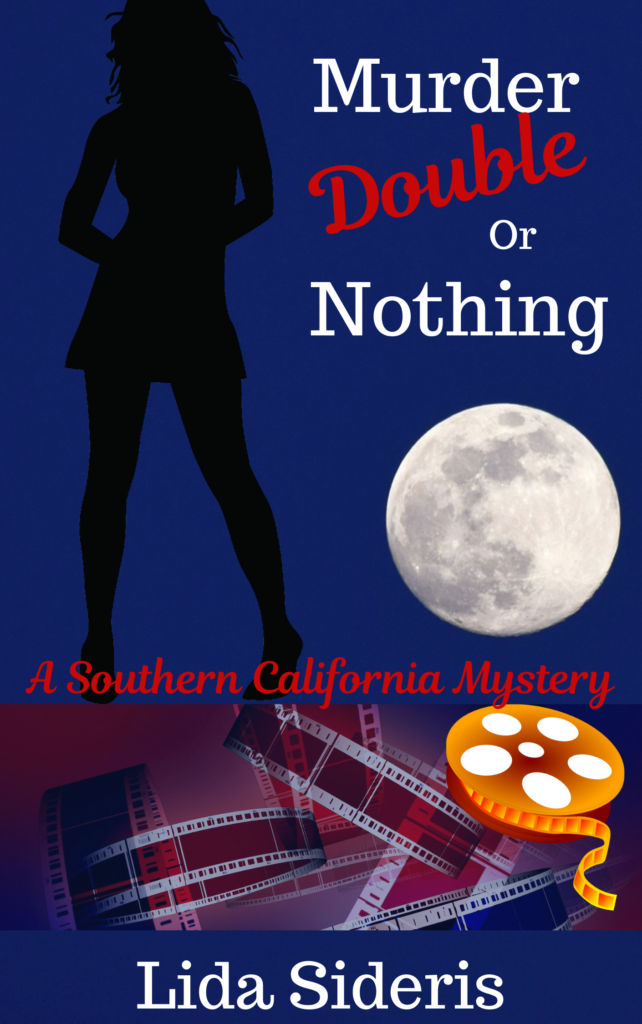 Murder: Double or Nothing: A Southern California Mystery

Corrie Locke, newbie lawyer and daughter of a late, great PI, is learning the ropes at the Hollywood movie studio where she works—and where things are never what they seem. Life imitates art when a fictional murder attempt turns real—right before her very eyes. With more than a little help from friends and a crazy movie legend, Corrie trips down a trail littered with wisecracks, mysterious messages, and marginally legal maneuvers to track down the killer. Meanwhile, clues keep disappearing and Corrie makes an enemy whose deadly tactics keep escalating. Will her impromptu sleuthing skills be enough to catch the mysterious assailant before he takes her down?

Excerpt Murder Double or Nothing: A Southern California Mystery by Lida Sideris

He pedaled the bicycle hard and fast down the narrow, deserted alley, stealing glances behind him. It was a late, warm Friday afternoon somewhere on the eastside of Los Angeles where police protection was scarce and hoodlums plentiful. Two and three story buildings huddled together on both sides of the rider. Graffiti stained the walls.
Hunched over the handlebars, the cyclist whizzed past a dented metal dumpster, unsettling newspapers and milk cartons pressed against a doorway. The collar of a gingham dress shirt stuck up beneath his red pullover and a backpack flopped behind him. Chuck Taylors clinched his nerdiness, as did the argyle socks. He looked fresh out of a computer lab, on his way to the library. There was nothing unusual about him, if you didn’t count the bulging eyes, gritted teeth and heavy panting. His expression belonged on a trapped animal.
A black sedan barreled around the corner, tires grinding and coughing up pieces of asphalt. Leaning his torso out of the passenger window, a muscular guy in a white T-shirt clutched a revolver. He aimed at the cyclist, fired three times and missed.
The rider angled around a corner and skidded to a stop. Dropping the bicycle on its side, he stumbled over the upturned wheel moments before the car crushed the bike beneath its fat tires, spitting out a tangle of metal and chrome. The car parked, and two thugs spilled out. They
raced after the cyclist, guns drawn. The nerd careened toward the side of a brick building and jumped up, arms outstretched above his head. The silver cuff around his wrist glinted as he grabbed the bottom rung of a fire escape ladder, legs flailing wildly. The ladder creaked and swayed. He’d barely started the climb when the hoodlums fired. And missed again.
“Oh, brother,” I whispered.
The nerd scrambled onto a landing and dove through an open window.
“Cut,” a gruff voice rang out.
“No one’s going to believe this,” I muttered.
“No one’s going to believe this,” I muttered.
“Do you mind?”
I stood apart from the assorted movie crew and onlookers, but one lanky guy hovered behind my shoulder, his arms crossed against his chest. His sun baked face turned a shade of red that complemented the brick building behind me. The guy lowered his shades along the bridge of his nose to get a better look at me.
“Do you have any idea what ‘quiet on the set’ means?” His words tumbled out through clenched teeth.
“I spoke after you yelled, ‘cut’. And I was talking to myself.” It didn’t add to my credibility, but it was the truth.
“You were mumbling the whole time.”
“Well, I couldn’t help it. The scene wasn’t realistic,” I told him.
“We’re not shooting a documentary here,” he said.
“But there’ll be people like me watching who’ll know. You just can’t squeeze out bullets like a squirt gun.” I was new to my lawyer gig at the movie studio, but not so new to PI work and guns. Thanks to my father. “It’s hard to miss at such close range.”
“How would you know?” He glared my way. “Did I hire you? Do you even work here?” He gave me a slow once over and squinted at the badge on my chest.
My tailored, sea green sheath dress and three-inch pumps had to give me some status. Even my usual tangle of hair had cooperated into a French twist. That was a first. I was a female force to be recognized.
“Carrie what?” His squint still pinned to my badge.
“Corrie. Corrie Locke. I work on the business side of the studio.”
“Is that so?” His lips turned inward. “Well, mind your own business. You should not be judging the fake shooting ability of my actors. This wasn’t even the final take.” He lifted his manicured chin and his voice. “I want her removed from the set.” His finger pointed to my head.
“Is this a comedy?” I asked. “Because that scene might work if it is.”
“It’s dead serious. As in police drama serious. Viewers are going to flock to this film. Know why? Because it’s going to be a highly watchable murder mystery.”
“Maybe the cyclist could be wounded. Even a surface wound would do.”
He looked around and yelled, “Why is she still here?”
I was now working on the main lot of Ameripictures Studios in Culver City, a town steeped in Southern California movie-making history. I’d been relocated nearly a month ago from a production arm in Newport Beach. A trouble free month, I might add. Unlike the stint in Newport, I’d avoided private investigation work completely on the main lot. My trouble free streak was going strong. Until now.
A tall guy in a loose shirt and baggy shorts hustled in my direction. I turned on my heel and was about to vacate the fictional city street when a long scream froze me in place. All eyes aimed for the brick building. White shades covered every window, except one. The fire escape had led the nerd to the only open window. A woman with inky black hair poked her head out of it. “Help, help!” she said. “He’s been stabbed.”

Lida Sideris is an author, lawyer, and all-around book enthusiast. She writes soft-boiled mysteries and was a recipient of the Helen McCloy Mystery Writers of America scholarship award.
Murder: Double or Nothing is #3 in her Southern California Mystery series, published by Level Best Books.
Lida is also the author of The Cookie Eating Fire Dog, a picture book for ages 4-8.
She lives in the northern tip of SoCal with her family, rescue dogs and a flock of uppity chickens.
To learn more, please visit: www.LidaSideris.com