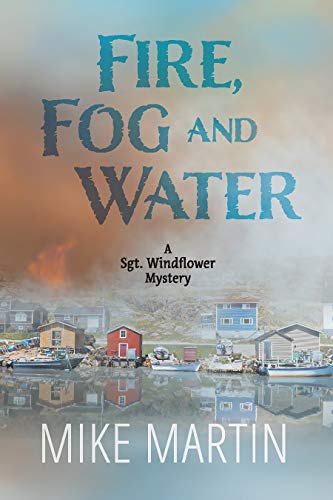 Sergeant Winston Windflower and his trusty crew at the Grand Bank detachment of the Royal Canadian Mounted Police have more than a few mysteries on their hands. Windflower suspects that the three cases—a homicide, a near-homicide and a fire on Coronation Street—are somehow connected, but how is proving difficult to determine, especially now that he must battle his unusually cranky mood, the never-ending winter that has gripped the coastal region of Newfoundland and his new, power-hungry boss.
In Fire, Fog and Water, award-winning author Mike Martin is true to form, retaining the light crime genre for which he is known while delving into the most perplexing social issues of our time, including mental health, addictions and workplace harassment. Windflower must not only solve the drug-and-death crimes that threaten the otherwise tranquil lives of Grand Bank’s residents, he must resolve his own internal conflicts before they consume him as surely as the blaze that engulfed the house on Coronation Street

This was the first book I had read from this series. It will definitely NOT be the last.
I was impressed with the writing and the depth shown with the characters.  The book and story are very well rounded between the crime aspect and the family and friendship parts.
Sgt. Windflower is not your typical police officer.
In the US we might call hum native but I guess indigenous is a good term. He has some seemingly mystical beliefs and practices such a dream walking that I felt added much to the story.
He supported his staff, current, former, etc and stood up for them and for his own values and beliefs. I very much appreciated this aspect of the story. He also loves and is attentive to his dog.
He is well versed in poetry and Shakespeare and classical music. As I said - quite well rounded and unusual for the LEOs I read about in most series.

That does not mean that the issues and crimes he comes up against both in his personal life and on-the-job are simpler. Very much relatable to current times and trends, this is a series that offers much for any sort of crime reader.

Mike Martin was born in Newfoundland, Canada. He is the author of the Sgt. Windflower Mystery series. Fire, Fog and Water is the 8th book in the series. A Long Ways from Home, was shortlisted for the Bony Blithe Light Mystery Award as the best light mystery of the year and Darkest Before the Dawn won for the 2018 Bony Blithe Award. Mike is currently Chair of the Board of Crime Writers of Canada, a national organization promoting Canadian crime and mystery writers.
Author Links Website - www.sgtwindflowermysteries.com
Facebook - https://www.facebook.com/TheWalkerOnTheCapeReviewsAndMore?ref=hl
Twitter @mike54martin