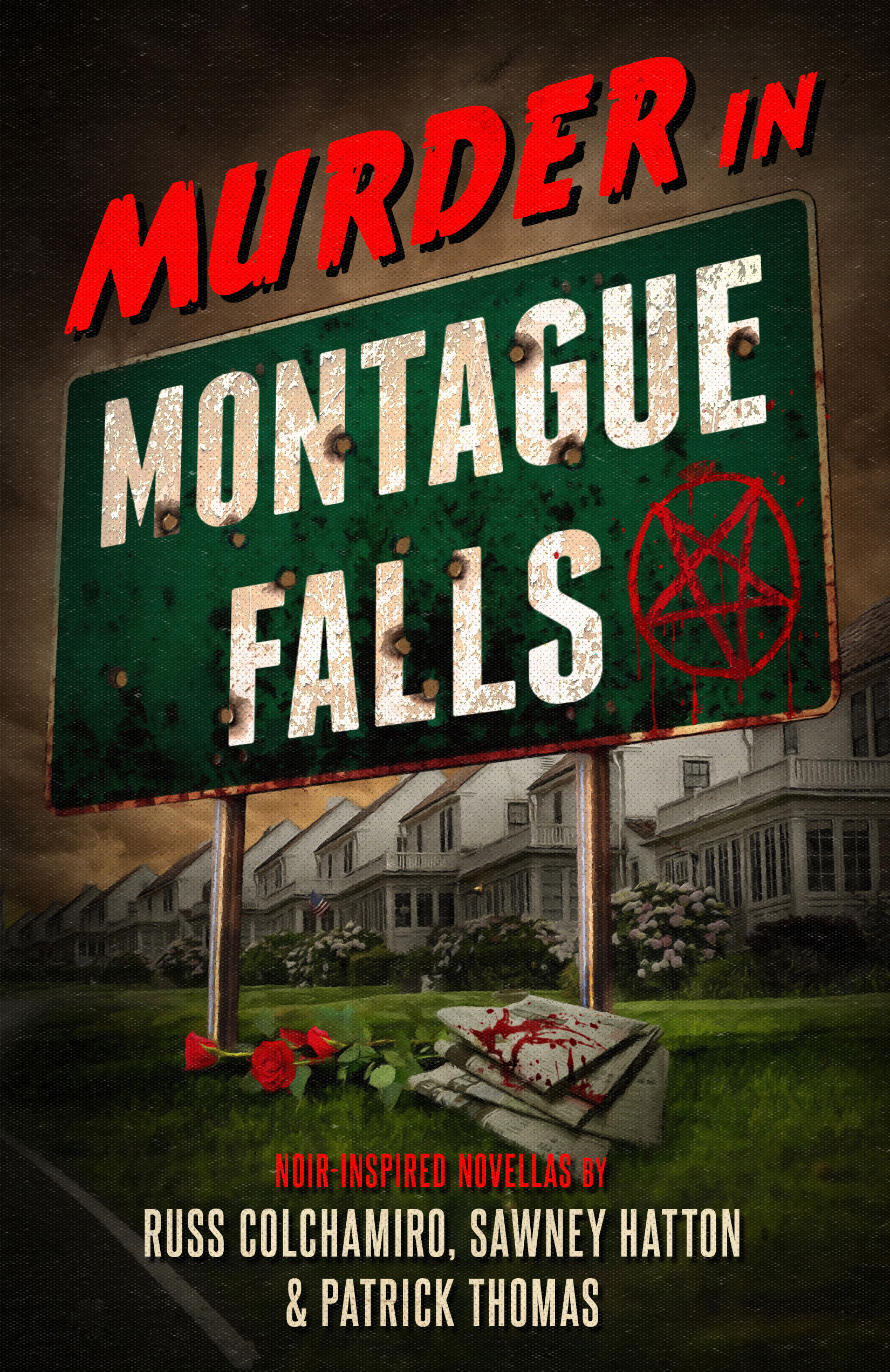 3 TALES OF TEENS TACKLING THEIR DARKEST RITES OF PASSAGE

In Colchamiro’s RED INK, a paperboy with an overactive imagination witnesses a brutal killing on his route—or has he taken his fantasy spy games a step too far?

In Hatton’s THE DEVIL’S DELINQUENTS, a trio of teenage misfits in pursuit of success, power, and revenge practice amateurish occult rituals… with deadly consequences.

In Thomas’s A MANY SPLENDID THING, a sultry high school teacher enrolls one of her students to get rid of her husband. But will the young man really graduate to murder?


The Turnback - You Kill Me:

"You Kill Me" is the official soundtrack to the book MURDER IN MONTAGUE FALLS (Noir-Inspired Novellas by Russ Colchamiro, Sawney Hatton & Patrick Thomas). Russ Colchamiro (a long time friend and fellow creator) asked the band to write what would be considered a closing credit tune for the book. We were happy to do so!

An infrared scope cut through the suburban tree line.
Perched on a high-angle branch in the neighbor’s spruce tree, Isaac could see her through the living room window, six houses away.
The M21 semi-automatic sniper rifle with fiberglass stock and 20-round box magazine was snug against his shoulder.
One bullet. One body.
Though camouflaged within a thicket of evergreen leaves, he had a clean shot.
“Come on,” he whispered, his eye against the scope. “Give me the signal.”
In perfect synchronicity, Isaac’s earpiece crackled. “Target confirmed. Kill shot approved.”

Natalie exits her room with the ritual kit, locking the door behind her.
Her father, swathed in a cornucopia-pattern quilt, sits in his wheelchair in the den, positioned near enough the window so that he can be in the daylight. Maybe he enjoys it, but one cannot tell for certain since his face registers no enjoyment, nor any other emotion.
Natalie kneels down before him, flips up the quilt, and undoes the bottom three buttons of his shirt, exposing his stomach. Between her fingertips, she wields the double-edged blade for a safety razor. She carefully nicks the skin above his father’s belly button. She looks up at him, detects no reaction.
She makes intersecting six-inch-long slices into his stomach, then carves a large circle around the lines, working around the seeping blood. Upon finishing, she evaluates her work and nods.
“I’m going to bring you back, daddy,” Natalie says to him, kissing his knuckles. “I promise.”


A MANY SPLENDID THING

Rosa went from smiling to bawling in less time than it took to blink. I pulled her in and held her against my bare chest. She pounded my ribs with her closed fists.
“Why won’t you understand! There is no other way! If we don’t kill him soon, you’ll come to school one day and find that he killed me. How are you going to feel then? Especially if he figures out that you’re my lover! You would follow me to the Pearly Gates.”
“Rosa, this talk of killing is crazy.”
She pushed herself back and slapped me hard across the face. “You think I’m crazy?”
***
Excerpt from Murder in Montague Falls. Copyright 2019 by Russ Colchamiro, Sawney Hatton, Patrick Thomas. Reproduced with permission from Russ Colchamiro, Sawney Hatton, Patrick Thomas. All rights reserved. 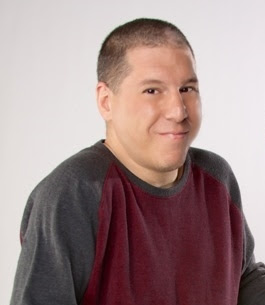 RUSS COLCHAMIRO is the author of the rollicking space adventure, Crossline, the zany sci-fi backpacking series Finders Keepers, Genius de Milo, and Astropalooza, editor of the sci-fi mystery anthology, Love, Murder & Mayhem, and contributing author for his newest project, Murder in Montague Falls, a noir novella collection, all with Crazy 8 Press.
Russ has contributed to several other anthologies including Tales of the Crimson Keep, Pangaea, They Keep Killing Glenn, Altered States of the Union, Thrilling Adventure Yarns, Brave New Girls vols. 3&4, Camelot 13, TV Gods 2, and Footprints in the Stars.
He is now finalizing the first in an ongoing SFF mystery series featuring his hard-boiled private eye Angela Hardwicke and has several other SFF, crime fiction, and children’s book projects in the works.
Russ lives in New Jersey with his wife, their twin ninjas, and their crazy dog, Simon. 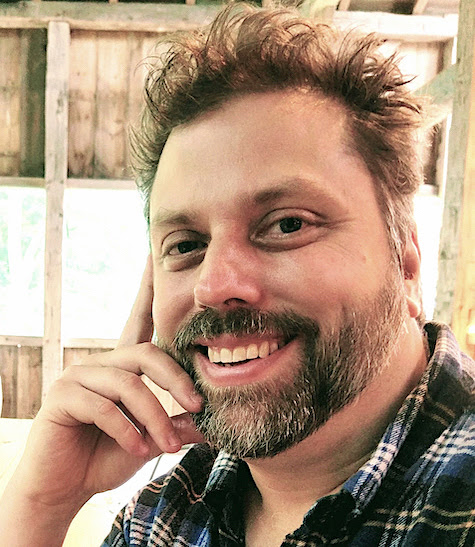 SAWNEY HATTON is an author, editor, and screenwriter who has long loved playing in the dark. His published works include the Dark Comedy novel Dead Size, the YA Noir novella Uglyville, and the Dark Fiction short story collection Everyone Is a Moon. He also edited the Sci-Fi Horror anthology What Has Two Heads, Ten Eyes, and Terrifying Table Manners?
Other incarnations of Sawney have produced marketing videos, attended chili cook-offs, and played the banjo and sousaphone (not at the same time). As of this writing, he is still very much alive. 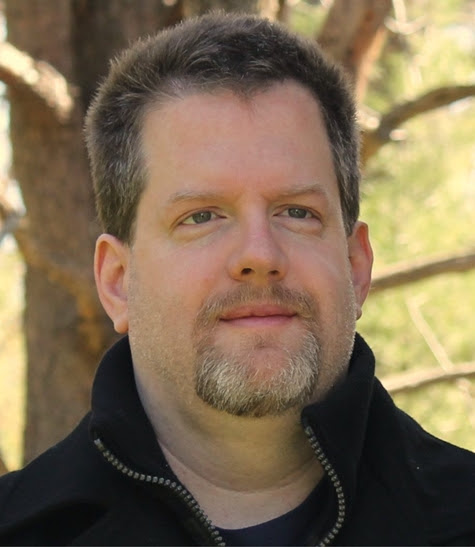 PATRICK THOMAS is the award-winning author of the beloved Murphy’s Lore series and the darkly hilarious Dear Cthulhu advice empire.
His 40+ books include Fairy with a Gun, By Darkness Cursed, Lore & Dysorder, Dead to Rites, Startenders, As the Gears Turn, Cthulhu Explains It All, and Exile and Entrance. His is the co-author of the Mystic Investigators series, The Santa Heist, and the Jack Gardner mysteries.
Patrick is the co-editor of Camelot 13 (with John French), New Blood (with Diane Raetz), and Hear Them Roar (with CJ Henderson), co-created The Wildsidhe Chronicles YA series and is the creator of the Agents of the Abyss series.
He has had more than 150 short stories published in magazines and anthologies, with his work for YA and children including the Ughabooz books, the Undead Kid Diaries, the Joy Reaper books, and the Babe B. Bear Mysteries as Patrick T. Fibbs.