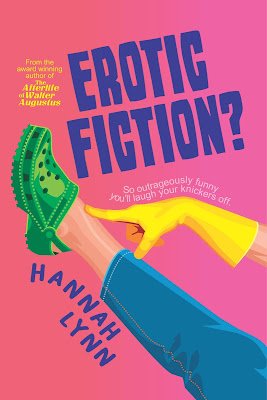 Sarah’s mind-numbing housewife existence is turning her brain to mush. With her
third bun in the oven, this British mum is drowning under a mountain of playdates,
bills, and head lice checks. But her man’s get-rich-quick idea of writing steamy
novels isn’t her ideal way to dial up life’s passion.

Drew desperately wants a break from Sarah’s whinging. And if that means
researching how to write racy books all by himself, then he’ll make the sacrifice. But
as he finally warms Sarah up to the sultry side hustle, their R-rated private project
gets publicly exposed…

With an office scandal brewing, it’s only a matter of time before gawking workers
and a perfectly nosy PTA president turn them into social pariahs.
Can Sarah and Drew earn some extra income from sizzling lit without falling prey to
stiff gossip?

Author Bio –
Hannah Lynn is an award-winning novelist. Publishing her first book, Amendments - a dark, dystopian speculative fiction novel, in 2015, she has since gone on to write the multi award winning The Afterlife of Walter Augustus - a contemporary fiction novel with a supernatural twist, Fiona and the Whale – a thought provoking romantic comedy and the delightfully funny and poignant Peas and Carrots series.

While she freely moves between genres, her novels are recognisable for their character driven stories and wonderfully vivid description.

She is currently working on a YA Vampire series and a reimaging of a classic Greek myth.

Born in 1984, Hannah grew up in the Cotswolds, UK. After graduating from university, she has spent twelve years as a teacher of physics, first in the UK and then around Asia and Europe. It was during this time, inspired by the imaginations of the young people she taught, she began writing short stories for children, and later adult fiction. Now as a teacher, writer, wife and mother, she is currently living in the Jordan.