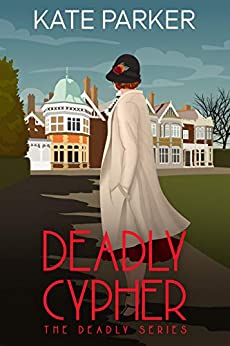 Could a murder at Bletchley Park cost Britain the war?

November, 1939. The British government has assembled a small group of intellectuals at an estate north of London as part of a top-secret codebreaking effort. Everything about it is clandestine. The facility is ringed with a veil of silence until one of the young female linguists is murdered.

Britain's counterintelligence spymaster tasks Olivia Redmond with finding the killer and the motive. Olivia is sent in alone, without clues or suspects.

Did the murder victim uncover a mole? Could Britain's program to break German enigma cyphers be compromised?

If Olivia fails, it could mean the destruction of Britain.

Deadly Cypher will be on sale until August 30, 2021 when it will be sold at full price.

Deadly Cypher, book seven of the Deadly Series, is for fans of World War II era spy thrillers and classical cozy mysteries, of intrepid lady sleuths with spunk and smarts. No explicit cursing, sex, or violence.

Deadly Cypher is the seventh book in The Deadly Series of World War II mysteries by Kate Parker.

Breaking a code could save a country or cost one one's life.

Based on actual historical events, this mystery draws the reader into a fascinating era.

Who can one trust? Who is to be believed?

Investigative reporter Olivia Redmond is once again charged with the task of finding the truth about a murder. Was it love gone wrong, being in the wrong place at a deadly time? Or is it connected to spies and Great War activity? Can Olivia discover who the killer is and their motive before she becomes the next victim?

With her love of travel, Kate Parker sets her novels overseas. Once home from her research trips and armed with hot tea and chocolate, she can be found clicking away on her keyboard, hiking the hills of central North Carolina, and spoiling her 90 pound muse puppy. She'd tell you what she did before she retired, but then she'd have to use certain skills to eliminate you. She pens stories to entertain readers who enjoy action and murder in tales about plucky heroines, quirky characters, and difficult situations in a bygone era. Her stories are sweet, as in no graphic sex, violence, or language. Her heroines remain ladylike while chasing murderers and escaping danger. Well, as ladylike as scratching, punching, and kicking can be.