DEATH ON THE MENU

Death on the Menu: A Key West Food Critic Mystery
by Lucy Burdette 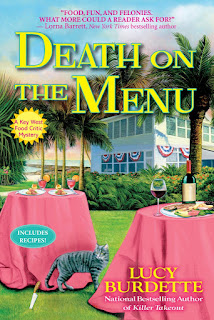 Death on the Menu: A Key West Food Critic Mystery

When a killer strikes just before flan time, beloved food critic Hayley Snow is forced to sniff out the killer before someone else bites the dust.
Hayley Snow, fiery food critic for Key Zest magazine, has just landed a ticket to one of the most prestigious events in Key West: a high-brow three-day conference at the Harry Truman Little White House. Even though she’ll be working the event helping her mother’s fledgling catering business, there’s plenty of spicy gossip to go around. But just before her mother’s decadent flan is put to the test, Key West’s most prized possession, Hemingway’s Nobel prize gold medal for The Old Man and the Sea, is discovered stolen from its case.
Unsavory suspicions point to Gabriel, a family friend and one of the new busboys working the event, who mysteriously goes missing moments later. Anxious to clear his name, Gabriel’s family enlists Hayley to help find him, but right as they begin their search, his body is found stabbed to death in the storeroom.
Hayley has no shortage of suspects to interrogate and very little time before the killer adds another victim to the menu in national bestselling author Lucy Burdette’s delectable eighth Key West Food Critic mystery, Death on the Menu.

Each chapter begins with a food or tasting inspired quote. I am not as much a foodie as some but I did find these passages interesting. Haley Snow is a food critic as well as a really good cook. She has an inquisitive mind which helps when she becomes involved in investigations. She is also good with people and loyal to those she cares about. This diplomatic event her mother is catering can make or break the catering business.It seems it can also make or break some other careers and relations between the Key Community at large, the United States and Cuba. This event, and Haley's participation in it, will also have far reaching effects on her romantic relationship.Because of the circumstances surrounding everything that happens, the police have limited time to figure out who committed the crimes before any evidence and all the suspects scatter. While she claims she doesn't want to investigate, for various reasons, Haley is in position to discover information and motives no one else has access to.While the plot seems food centric, there is a lot of information on the area and the famous author Hemingway. There is something in the book for any reader. The problems and crimes are definitely not simple to solve. 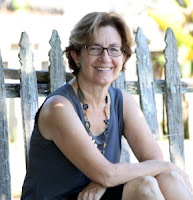