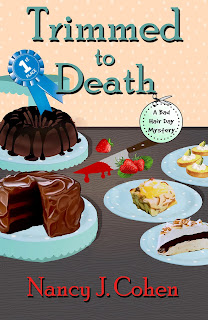 Mix together a cocktail for murder, add a few salty suspects, toss in a dollop of sweet humor, and you have the recipe for Trimmed to Death, #15 in the Bad Hair Day cozy mystery series.
Savvy hairstylist and amateur sleuth Marla Vail enters a charity bake-off contest at a fall festival sponsored by a local farm. While she waits to see if her coconut fudge pie is a winner, Marla joins a scavenger hunt where people playing character roles are the targets. Instead of scoring points with a live person, she finds a dead body planted face-down in the strawberry field. Who would want to cut short the life of food magazine publisher and fellow bake-off contestant Francine Dodger? As she investigates, Marla learns there’s no shortage of suspects. A celebrity TV chef, food critic, olive oil importer, food truck owner, pastry chef, and cookbook author may be stirring up more than their next recipe. Can Marla unmask the killer before someone else gets trimmed from life?
Recipes Included!

“Francine intended to do an article on seasonal rites. I invited her here to see what we do to celebrate the fall renewal. Unfortunately, she never made it.”

Marla shivered as robed individuals muttered their incantation in unison. It reminded her of a witch’s circle. Could this group’s aims really be so innocent?

“Did you attend the harvest festival at Kinsdale Farms the day she died?” Dalton added.

Colin shook his head. “I wish I had gone. Then maybe I could have prevented what happened. I was at a popular culture conference in New Orleans that weekend.”

“Do you know anyone who might have wished to harm Ms. Dodger?” Dalton swayed slightly on his feet as he spoke.

Marla gave him a sharp glance. Was the incessant chanting getting to him, or was it the drink he’d ingested?

Colin tented his hands together in prayer formation. “Francine did sound excited about an article she’d been researching. ‘Now I’ll finally get my revenge’ are the exact words she said to me. But when I pressed her for details, she wouldn’t say more.” He scrubbed a hand over his face. “I can’t believe she’s gone. We were good together, and now…”

“I’m sorry for your loss,” Marla told him in a soothing tone. “Is there anything else you can tell us that may be helpful? I’m sure you want to see justice done for Francine same as we do. Even something seemingly irrelevant might be important.”

“Her colleagues might have more information, especially the lady who took over her job. Maybe she orchestrated the whole thing to get a promotion.”

“I’ve interviewed them,” Dalton said, “and no one seemed to bear Francine any ill will that I noticed. As for the topic she’d been pursuing for her alleged exposé, she was keeping it a closely guarded secret, same as her relationship to you.”

As soon as those words left his mouth, Dalton’s legs folded. He sank to the ground in a sliver of lantern light that illuminated his senseless form.

One of the best things about cozy mysteries is that you never know what you are going to learn in each book. The Bad Hair Day Mysteries is one of my favorite series.
This book takes us away from the spa to a local food fair event and bake-off. The competition is rough but it is the behind the scenes grudges that are killer.
I like the relationships between the characters, both familiar and new, in this book.
As Marla's step-daughter is growing up, it is a precipitous balance between the well mannered, helpful girl we've seen and the independent teenager she is becoming. Initially Marla did not want children. When she took in her best friend's baby after a tragedy, some maternal hormones must have been jumpstarted. Now Marla is worried about how empty the house will be, too soon, when Brianna heads off to college.
Detective Vail has come to understand how valuable his wife's instinct and intellect are to his investigations. He also knows he can not keep her from snooping and trying to find answers.
His main concern is her safety. Will Marla's penchant for asking questions make her a target?
Discovering the motive will make a huge difference in narrowing the suspect field.
There is much going on and conflicting clues and evidence make it a difficult case to solve. 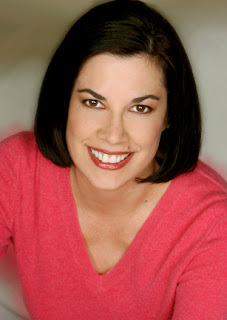